The Hong Kong Police Force Public Relations Branch has issued this response to the FCC’s letter to Commissioner of Police Chris Tang regarding his recent comments on “fake news”, which is posted in full below. 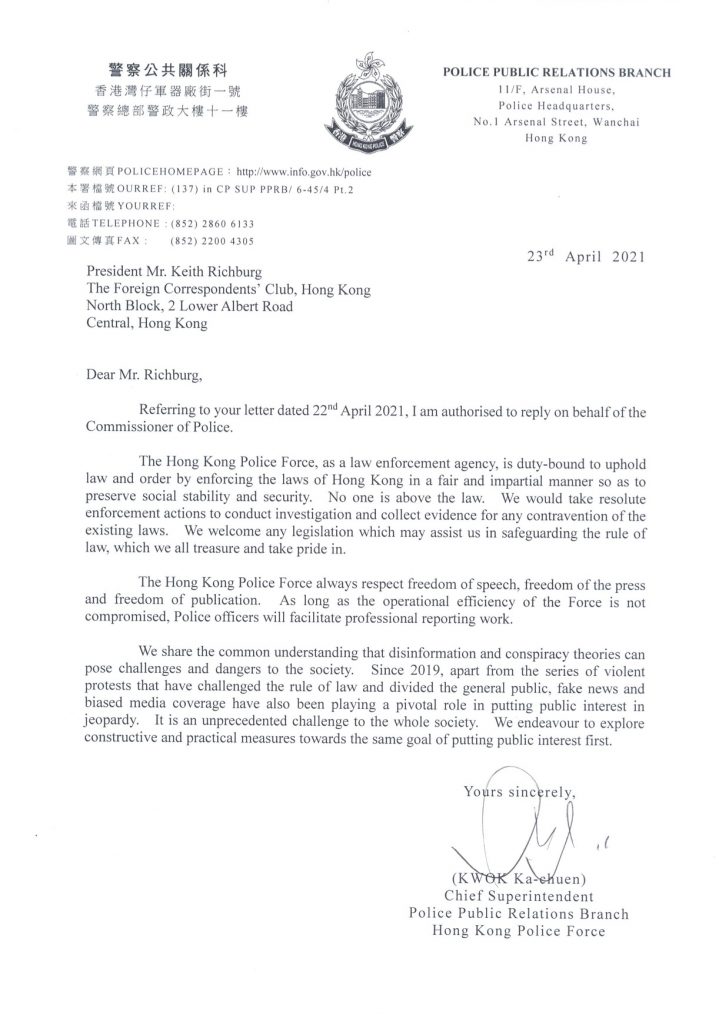 The Office of the Commissioner of the Ministry of Foreign Affairs of China in the HKSAR issued the following response to the FCC’s statement regarding the prosecution of journalist Bao Choy:

The spokesperson of the Office of the Commissioner of the Ministry of Foreign Affairs of China in the HKSAR expressed strong disapproval of and firm opposition against the unwarranted remarks by the Foreign Correspondents’ Club Hong Kong (FCC) and certain other external forces about the Hong Kong judiciary’s trial of a case related to false statements. Such comments openly vilified the SAR Government and trampled upon the rule of law on the pretext of press freedom, and constituted a blatant interference in Hong Kong affairs, which are China’s internal affairs.

The spokesperson said that Hong Kong is governed by the rule of law, where the law shall be strictly abided by, any lawbreaker shall be held accountable, and no organization or individual shall be above the law. The fact for the particular case was clear and the evidence solid. Both the Hong Kong police’s arrest of the suspect and the judicial proceedings complied with the law and had nothing to do with press freedom, which is enshrined in the Basic Law of the HKSAR and the Law of the PRC on Safeguarding National Security in the HKSAR. Some external forces, however, have tried to exploit the case and distorted the truth by alleging that press freedom is stifled in Hong Kong. It has only laid bare their ulterior motive to seek privileges above the law under the guise of press freedom, obstruct the SAR Governmnent’s law-based governance, and undermine Hong Kong’s prosperity and stability. But such wishful thinking will only come to naught.

The spokesperson emphasized that since the anti-amendment unrest, the Hong Kong police have lived up to their duty and rigorously enforced the law with admiring professionalism and commitment for the purpose of safeguarding national security and Hong Kong’s prosperity and stability, and protecting Hong Kong resident’s interests and well-being. The Hong Kong community and all those who love both the city and the country have born testimony to the fact. We firmly support the SAR Government’s law-based governance, and support the Hong Kong police’s legitimate efforts to combat violence and crime, uphold law and order, and ensure the continuous success of “One Country, Two Systems”.

The spokesperson reiterated that Hong Kong is part of China. We urge the FCC and relevant external forces to face the facts, know their place, truly respect Hong Kong’s rule of law and judicial independence, and avoid saying one thing but doing another, still less meddle with Hong Kong affairs and China’s internal affairs at large on the pretext of press freedom.

The Foreign Correspondents’ Club, Hong Kong on 22 April delivered a letter to Commissioner of Police Chris Tang seeking clarity regarding his recent comments on prosecuting “fake news.” The FCC is publishing the letter in full below. 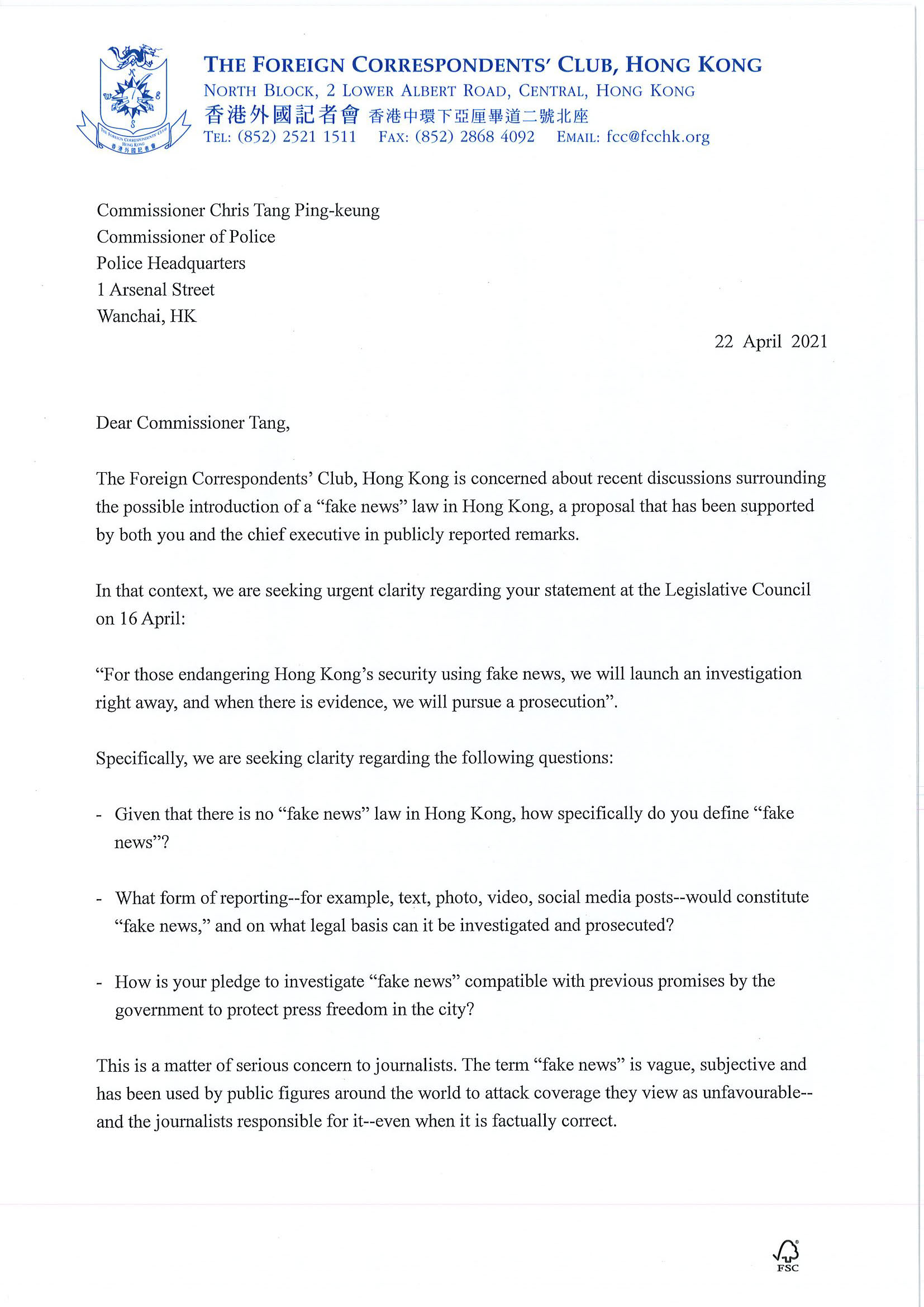 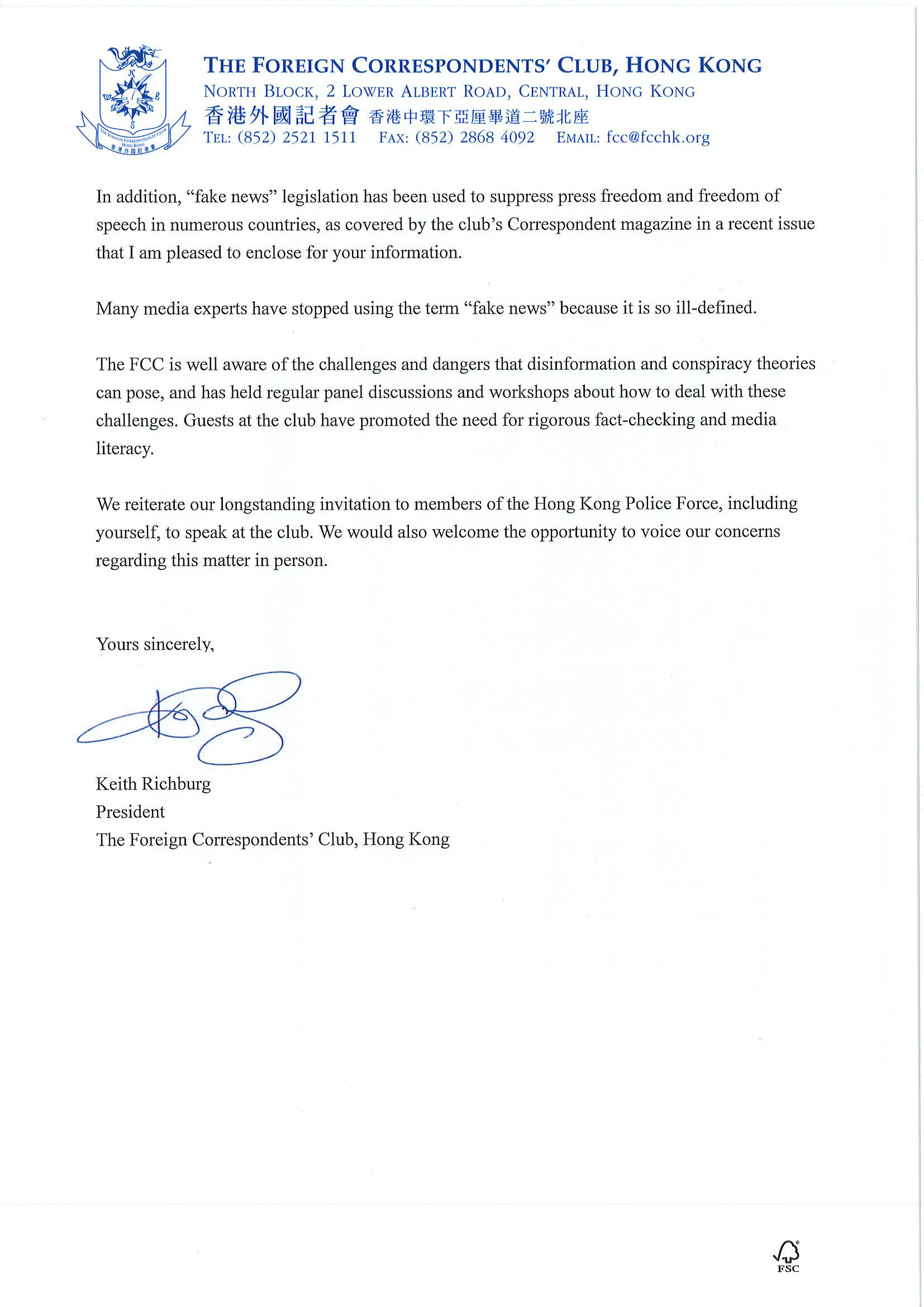 The FCC Condemns the Prosecution of Journalist Bao Choy

The Foreign Correspondents’ Club, Hong Kong strongly condemns the prosecution of Bao Choy, the former RTHK journalist convicted on Thursday for her use of a public database in the course of reporting a documentary.

The government’s actions against Choy set a dangerous precedent. They open the door to further legal action against journalists for engaging in routine reporting. They will also deter journalists from accessing legally available public records in Hong Kong.

Although Choy will not go to jail, she will be left with a criminal record and be forced to pay an HKD 6,000 (US$774) fine for only doing her job. In delivering her verdict, the judge accused Choy of misrepresenting herself and asked her to find other ways to seek the information she needed for her report.

However, the government has narrowed the categories of who could access the data in question and why. It is clear that Choy was singled out and punished for a search that is routinely conducted by journalists in Hong Kong. Choy’s documentary investigated the actions of police during an attack on protesters and commuters that took place at the Yuen Long MTR station on July 21, 2019.

While we appreciate that the judge overseeing the case spared Choy jail time, citing the merits of her reporting and the public interest involved, we wish the prosecutors had shown similar restraint and never brought this case in the first place.

Protests taking place across Myanmar in the aftermath of the February 1 military coup are unlike any prior demonstrations because of the unity between different generations and the use of technology, said Sonny Swe, co-founder and publisher of Frontier Myanmar, in a Zoom webinar hosted by the FCC.

“It’s a lot more organised, it’s a lot more tech-savvy and there are three generations working together,” Swe said. “This is a different resistance now.”

The COVID-19 pandemic had forced people in Myanmar to unify and help each other, a trend which has carried over to the country’s Civil Disobedience Movement, which aims to cripple the military through strikes that will weaken the economy.

“That’s why you see citizens helping each other and helping each other. It comes from the COVID [response],” Swe told FCC Correspondent Governor Shibani Mahtani during the discussion. “This is the positive sign of this country.”

Swe said the junta has been caught off guard by the overwhelming backlash to the coup, and that the military’s way of thinking hasn’t changed in decades. Investor confidence has plummeted in a way it didn’t in past times of social unrest, he said.

“A lot of people don’t trust in the military regime,” he said. “The strategies they’re using aren’t working obviously.”

Asked to comment on the controversy surrounding CNN correspondent Clarissa Ward’s recent reporting trip to Myanmar, Swe said that it had been misleading to label the story an exclusive – “the only exclusive was getting the permission” to enter the country.

He understood why a news outlet would accept such a trip, but “CNN should have done the proper homework before she flew into Myanmar”.

“We have the other international news outlets here and also we have local journalists who are risking their lives every day on the street reporting everything”.

As for Myanmar-based media organisations, he said that they were facing an increasingly difficult situation.

“We are trying our best to stay alive at this point,” Swe said.

Frontier had launched a membership programme before the pandemic and it was picking up, but safety was a major concern.

He described a situation of increasing danger for the journalists he employs, and the steps he’s taken to try to keep everyone safe and minimise harm, including only assigning people to cover their townships so they don’t have to travel.

Still, the situation grows increasingly dangerous for journalists, and Swe shared the story of one of his journalists in Mandalay who’d been shot in the hand and will likely never regain full function in it, despite having undergone three surgeries already.

“If something like this happens, it ruins someone else’s life,” Swe said. “The only thing I can do is to keep fingers crossed and tell them to be safe, and I don’t know how long we will hold on to this.”

The crackdown is wide ranging; international media organizations, large and small platforms as well as ethnic media outlets have all been affected. All of the gains the country made in recent years towards a freer press environment stand to be lost if the targeting of the media continues.

Despite these threats and at great personal safety risk, journalists continue to fearlessly report, bringing the stories and images of a country in crisis to the world. Security forces should allow reporters to work without interference. Those arrested should be immediately released and the charges against them dropped so they can return to their jobs and families.

In an effort to aid the important work of reporters, below is a list of media outlets and assistance organizations currently active in Myanmar. The FCC commends their work and is providing links for members and the public to donate to their efforts:

The exhibition “Myanmar’s Bold Anti-coup Movement”, featuring the work of Frontier Myanmar’s photojournalists, is currently on display at the FCC through April 30. Non-members are welcome to view the exhibition from 10am-12 noon and 3-5:30pm daily.

Nominees for the Election of The Board of Governors 2021-2022

Here are the nominations for the FCC Board of Governors 2021-2022. Below are links to each nominee’s bio and policy statement. Please read them before voting.