With countries around the world in and out of lockdown due to COVID-19, the pandemic has provided ample opportunities for many to catch up on reading.

If you’re on the hunt for your next great read, look no further than this list of book recommendations from the FCC’s distinguished guest speakers, including Noam Chomsky, Joseph Stiglitz, Lingling Wei and many more.

The China editor of Axios appeared on October 5 as part of a panel discussing Beijing’s influence on Hollywood. She recommended The War on the Uyghurs by Sean. R Roberts; and Outsourcing Empire: How Company-States Made the Modern World by Professor Andrew Phillips. 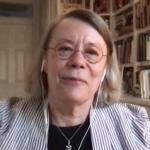 Author, journalist and former war correspondent Elizabeth Becker joined us for a March 9 discussion of her latest book, You Don’t Belong Here: How Three Women Rewrote the Story of War. During the talk, she said she had recently read John M. Barry’s The Great Influenza: The Story of the Deadliest Pandemic in History and Gore Vidal’s Lincoln. Becker also said she was looking forward to reading Viet Thanh Nguyen’s new novel, The Committed.

Author and journalist, Ben Bland, appeared on September 22 to talk about Indonesia’s president, Joko Widodo. Bland recommended the book, The Secret World: A History of Intelligence by Christopher Andrew. Bland is the author of Man of Contradictions: Joko Widodo and the Struggle to Remake Indonesia.

Appearing on an October 22 Zoom panel to discuss the future of the COVID-19 pandemic, Dr. Sarah Borwein recommended The Last Kings of Shanghai: The Rival Jewish Dynasties That Helped Shape Modern China by Jonathan Kaufman.

The world’s most influential public intellectual and linguist joined a Zoom webinar on August 7. He recommended two of his own books that examine the media: Manufacturing Consent: The Political Economy of the Mass Media by Edward S. Herman and Noam Chomsky, and Necessary Illusions: Thought Control in Democratic Societies.

Lawyer and author of City on Fire: The Fight for Hong Kong Antony Dapiran appeared at the FCC for a November 12 lunch event. He recommended Half the Perfect World: Writers, Dreamers and Drifters on Hydra, 1955-1964 by Paul Genoni and Tanya Dalziell, Summer by Ali Smith, and Children of Time by Adrian Tchaikovsky.

Variety‘s China bureau chief appeared on October 5 as part of a panel discussing Beijing’s influence on Hollywood. She recommended The Utopia of Rules by David Graeber. 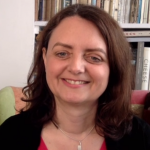 Food writer and cookbook author Fuchsia Dunlop appeared in an FCC Zoom event on March 16 to discuss Sichuanese cuisine, the wonderful idiosyncrasies of Chinese cuisine and her latest book, The Food of Sichuan. During the talk, she said that she’d recently been in “an early-20th-century Beijing phase” in terms of her reading habits, and she mentioned Twilight in the Forbidden City and City of Lingering Splendour as two books she’d enjoyed.

Appearing at an October 20 Zoom event, New Yorker staff writer Jiayang Fan recommended A Life’s Work: On Becoming a Mother by Rachel Cusk as well as Yang Jisheng’s forthcoming The World Turned Upside Down: A History of the Chinese Cultural Revolution. 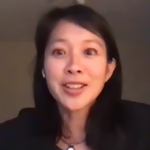 Radio Free Asia president Bay Fang spoke to the FCC on March 18 about the challenges facing her organisation in reporting on countries with authoritarian governments. A busy mother of two young children, Fang said the only thing she’d been reading recently was a children’s book called Dragonology, a favourite of her dragon-obsessed four-year-old son.

Mary E. Gallagher, professor at The University of Michigan and director of the Lieberthal-Rogel Center for Chinese Studies, joined a panel discussion on August 12 on the new China-U.S. Cold War. Her recommended reads exploring American history were Hillbilly Elegy: A Memoir of a Family and Culture in Crisis by J. D. Vance, Strangers in Their Own Land: Anger and Mourning on the American Right by Arlie Russell Hochschild, and The Politics of Resentment: Rural Consciousness in Wisconsin and the Rise of Scott Walker (Chicago Studies in American Politics) by Katherine J. Cramer.

Bonnie Glaser, senior adviser for Asia and the director of the China Power Project at the Center for Strategic and International Studies (CSIS), appeared on a panel discussion on August 12 on the new China-U.S. Cold War. Her recommendations, which focused on China, were China’s Western Horizon: Beijing and the New Geopolitics of Eurasia by Daniel Markey; Superpower Interrupted: The Chinese History of the World by Michael Schuman; and The Three-Body Problem by Cixin Liu. Joining another panel discussion on November 20, she said she looked forward to reading The World: A Brief Introduction by Richard Haass.

Award-winning journalist and filmmaker Stan Grant appeared via Zoom on August 18, and recommended the following books: The Light That Failed: Why the West Is Losing the Fight for Democracy by Stephen Holmes and Ivan Krastev, Without God: Michel Houellebecq and Materialist Horror by Louis Betty, and The Devil in History: Communism, Fascism, and Some Lessons of the Twentieth Century by Vladimir Tismaneanu.

Investigative reporter Mara Hvistendahl, author of The Scientist and the Spy, participated in a November 23 Zoom interview to discuss the process of reporting her second book as well as her experience working as a journalist in China. She recommended two books: Rodham: A Novel by Curtis Sittenfeld, and previous FCC guest speaker Thomas Kent’s Striking Back: Overt and Covert Options to Combat Russian Disinformation.

Garry Kasparov, former world chess champion, democracy campaigner and author of Deep Thinking: Where Machine Intelligence Ends and Human Creativity Begins, was our special guest on August 27 when he discussed China and U.S. politics. He was reading three books: Mythos: The Greek Myths Retold and Heroes: Mortals and Monsters, Quests and Adventures by Stephen Fry and Churchill: Walking with Destiny by Andrew Roberts.

Disinformation expert and author of Striking Back: Overt and Covert Options to Combat Russian Disinformation, Thomas Kent, appeared on an October 15 panel to discuss fake news around the U.S. election. His recommended read was Do Morals Matter?: Presidents and Foreign Policy from FDR to Trump by Joseph S. Jr. Nye. 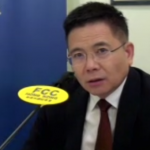 Bauhinia Party chairman Li Shan appeared at the FCC for a February 26 breakfast talk to explain his party’s platform and vision for the future of Hong Kong. Li said that he’d recently read the memoirs of Lee Kuan Yew, the former prime minister of Singapore.

Kishore Mahbubani, Asia scholar and author of Has China Won?: The Chinese Challenge to American Primacy, recommended A Different Sky by Meira Chand, a book that tells the story of his home country, Singapore, when he joined us on August 10.

Appearing on an October 22 Zoom panel to discuss the future of the COVID-19 pandemic, Professor John Nicholls recommended Lords of the Desert: The Battle Between the United States and Great Britain for Supremacy in the Modern Middle East by James Barr.

Suzanne Nossel, CEO of PEN America and author of Dare to Speak: Defending Free Speech for All, appeared by Zoom on August 5 and recommended a book by our guest from a month earlier, John Bolton: The Room Where It Happened: A White House Memoir. She also endorsed Intimations: Six Essays by Zadie Smith.

Bloomberg’s chief economist appeared on a November 20 Zoom panel to discuss how the Biden administration will manage its relationship with China. During the talk, he recommended two books on Russia: Lenin’s Tomb: The Last Days of the Soviet Empire by David Remnick, and All the Kremlin’s Men: Inside the Court of Vladimir Putin by Mikhail Zygar. 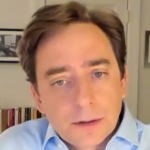 On February 23, New Yorker staff writer Evan Osnos joined us for a book talk on Joe Biden: The Life, the Run, and What Matters Now, his biography of the 46th U.S. president. Osnos said he’d been reading Martha C. Nussbaum’s The Monarchy of Fear: A Philosopher Looks at Our Political Crisis in preparation for his upcoming book Wildland: The Making of America’s Fury.

Admiral Bill Owens, formerly the vice chairman of the U.S. Joint Chiefs of Staff, revealed he was reading America in the World: A History of U.S. Diplomacy and Foreign Policy when he appeared at a September 2 webinar. 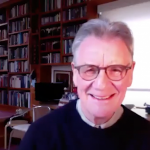 Monty Python star Michael Palin appeared in a December 9 Zoom event hosted by the FCC to discuss his long career in comedy, acting and travel writing. During the interview, he recommended Goodbye to All That by Robert Graves, and Adam Johnson’s The Orphan Master’s Son, which won the Pulitzer Prize for fiction in 2013. 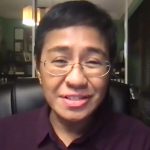 A world-renowned journalist who is CEO and president of rapper.com, Maria Ressa appeared on a February 9 panel to discuss social media bans. At the end of the discussion, she recommended two books: What Tech Calls Thinking by Adrain Daub and The Age of Surveillance Capitalism: The Fight for a Human Future at the New Frontier of Power by Shoshana Zuboff. 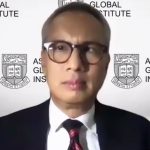 The director of knowledge dissemination and a visiting associate professor at Asia Global Institute, Alejandro Reyes appeared on a February 9 panel to discuss social media bans. He recommended reading Interior Chinatown: A Novel by Charles Yu. 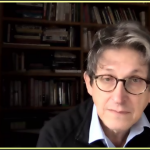 Formerly the editor of The Guardian for 20 years, Alan Rusbridger participated in a Zoom event on December 10 to discuss his new book, News and How to Use It: What to Believe in a Fake News World. He also recommended two books: Barbara Amiel’s “searingly honest” memoir Friends and Enemies: A Life in Vogue, Prison, & Park Avenue and Sasha Swire’s Diary of an MP’s Wife.

Washington Post visual forensics video reporter, Elyse Samuels, appeared on an October 15 panel to discuss fake news around the U.S. election. She was reading a novel: My Brilliant Friend by Elena Ferrante.

The winner of 2001’s Nobel Memorial Prize in Economics appeared via Zoom on September 15 and recommended his most recent book, People Power, and Profits: Progressive Capitalism for an Age of Discontent; and Paul Begala’s You’re Fired: The Perfect Guide to Beating Donald Trump.

Southeast’s Asia Editor at The Diplomat, Sebastian Strangio participated in a Zoom event on October 12 to discuss his book In the Dragon’s Shadow: Southeast Asia in the Chinese Century. He recommended Fortunes of War: The Balkan Trilogy by Olivia Manning.

PEN America’s deputy director of free expression research and policy, James Tager, appeared on October 5 as part of a panel discussing Beijing’s influence on Hollywood. He recommended White Man’s Game by Stephanie Hanes; and Night in the Lonesome October by Roger Zelazny.

Mark Thompson, the former BBC Director-General and CEO of The New York Times Co., participated in a November 24 Zoom discussion about the troubles facing RTHK and other public service broadcasters around the world. He recommended Why Liberalism Failed by Patrick J. Deenen as well as the unabridged version of Tolstoy’s War and Peace produced by Naxos AudioBooks.

Ambassador Kurt Tong, the former U.S. consul general in Hong Kong, appeared via Zoom on November 10 to discuss how President-elect Joe Biden will approach foreign policy in Asia. His recommendations were Great State: China and the World by Timothy Brook and The People, No: A Brief History of Anti-Populism by Thomas Frank.

Lingling Wei, Wall Street Journal reporter and author of Superpower Showdown: How the Battle Between Trump and Xi Threatens a New Cold War, admitted during an August 12 panel discussion that lockdown had introduced her to the children’s classic, The Lorax (Classic Seuss) by Dr Seuss. She was also reading Wild Swans: Three Daughters of China by Jung Chang. 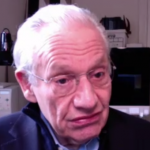 On February 24, legendary investigative reporter Bob Woodward joined us on Zoom and offered a postmortem on the Trump presidency. Woodward said that he was currently reading Joe Biden’s Promises to Keep: On Life and Politics in preparation for his upcoming book on Biden.