This statement was released by the Hong Kong Journalists Association on September 30, 2019.

The Hong Kong Journalists Association deplores the use and threat of violence towards journalists covering events in Hong Kong.

Reports have stated that the journalist, working for an Indonesian-language publication based in Hong Kong, was injured in the eye by a rubber bullet or beanbag round whilst covering demonstrations in Wanchai.

We are gravely concerned by these reports of serious injury to a journalist whilst covering events in HK. We are particularly concerned by reports that the injury was caused by a rubber bullet or bean bag round and that the journalist was not in the immediate vicinity of protestors at the time of the incident, she was clearly identifiable as being a member of the press and was with a number of other journalists at the time also wearing high visibility press markings.

The HKJA will be investigating this incident and if substantiated, will be taking action to protect the rights and safety of our members

We deplore the use and threat of violence towards journalists covering events in Hong Kong from any source and calls on police and protestors to allow journalists to carry out their job of reporting the facts without risk of serious injury or threats of violence.

The Foreign Correspondents’ Club of Hong Kong expresses its deep concern over multiple reports of police violence on Sept. 28 and Sept. 29 against journalists covering the Hong Kong protests.

They include a report of a serious injury to an Indonesian journalist working for a Hong Kong-based publication who was shot in the face by a police officer using a non-lethal round. Footage from the incident shows she was clearly identified as a journalist and that the police officer fired a parting shot from only a few meters away.

Eyewitness reports from journalists, and video and photos shared on social media, have documented incidents over the weekend that included:

* Journalists being hit by tear gas canisters and rubber bullets;

* The press being hit by spray from a water cannon containing dye and an agent that causes skin irritation;

* Journalists being verbally threatened by police;

The FCC is investigating these reports and calls for police restraint, especially with planned demonstrations in Hong Kong on the October 1 anniversary of the People’s Republic of China. The FCC calls for journalists to be able to cover the protests without interference or threat of attack, which is a right provided under Hong Kong law. The FCC also emphasizes that the media has a right to film and photograph police activity in public places, as long as the press is not impeding them.

The FCC continues to call for an independent inquiry into violence against journalists and interference with the media’s ability to cover the protests. The FCC urges that any such investigation should be transparent.

We have expressed our concern over these types of incidents since the start of the protests in June, yet the violence and interference has only escalated. The multiple incidents on Sept. 28 and Sept. 29 marked a dramatic deterioration in the ability of the media to cover the protests and seriously undermine Hong Kong’s long reputation as a place where journalists can work freely and without harassment.

Hate crime is on the rise globally, facilitated by social media which presents an opportunity for people to say things online they don’t have the guts to say face-to-face, says a member of a leading Jewish human rights organisation.

Rabbi Abraham Cooper, associate dean of the Simon Wiesenthal Center, said social media firms needed to take more responsibility for the content posted on their platforms. He also discussed the spread of anti-Semitism, showing examples from around the world of the use of Nazi imagery including the swastika.

The Hong Kong Journalists Association has condemned the publishing online of journalists’ personal details, known as doxxing. In a statement, it called on the government and police to condemn and “thoroughly investigate” attacks on journalists, including these recent instances of publishing personal data.

The FCC joins the HKJA in expressing its grave concern over the adoption of this tactic to intimidate journalists in Hong Kong, who are already facing physical violence from police, attacks by thugs at protests, verbal abuse and online trolling.

Members of the Foreign Correspondents’ Club of Hong Kong held a silent protest on September 18 to highlight the club’s concern over the increasing limits to media access and violence against journalists covering the ongoing protests in the city. 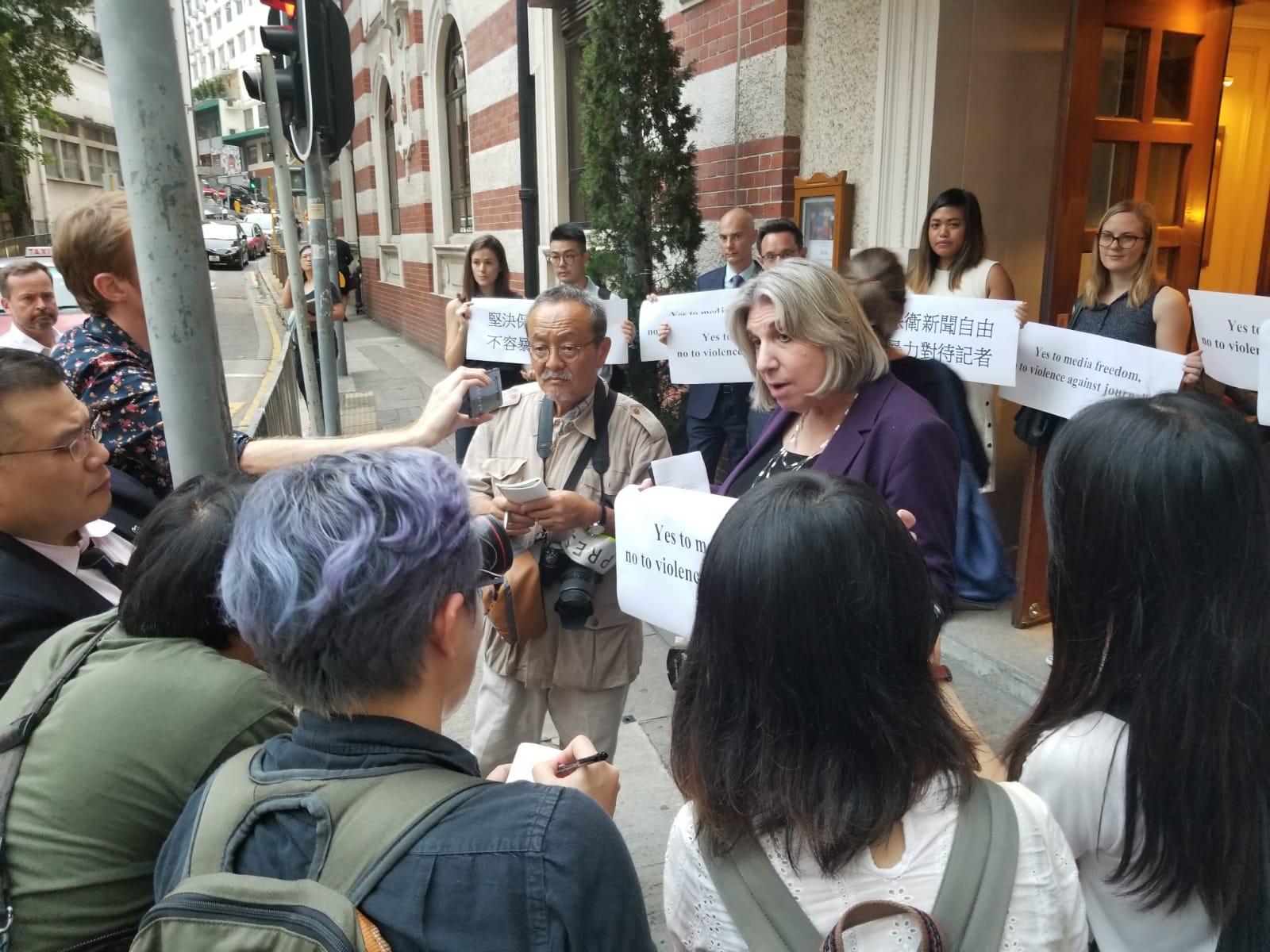 Carrying banners reading “Yes to press freedom, no to violence against journalists”, a dozen members gathered outside the club in Central.

“The FCC is gravely concerned about the growing number of incidents of police violence against journalists who are doing their job covering the protests in Hong Kong,” said Jodi Schneider, FCC president. “We are holding a silent protest against this violence and any attempts to interfere with media coverage.”

“We are also calling for press freedom — for support of our right as journalists to cover the protests; a right provided us under Hong Kong law,” she said.

The FCC continues to call for an independent investigation into all forms of violence and intimidation directed at journalists since the start of the protests in June. The organisation also calls on the Commissioner of Police to publicly address these reports of violence.

“We want access to cover the protests and answers from the authorities,” Schneider said. 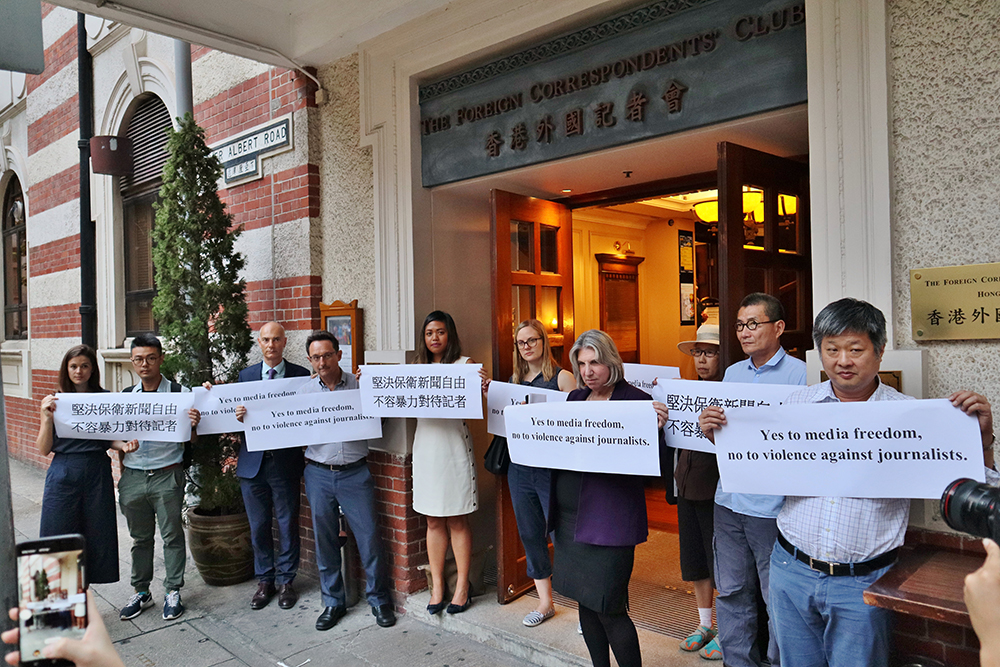 It’s a dangerous place out there for journalists, says veteran Washington Post editor

The mainstream media needs to be fair and give people the chance to make up their own minds in order to survive the current climate that has seen an erosion of trust in the press, according to veteran journalist David Ignatius. 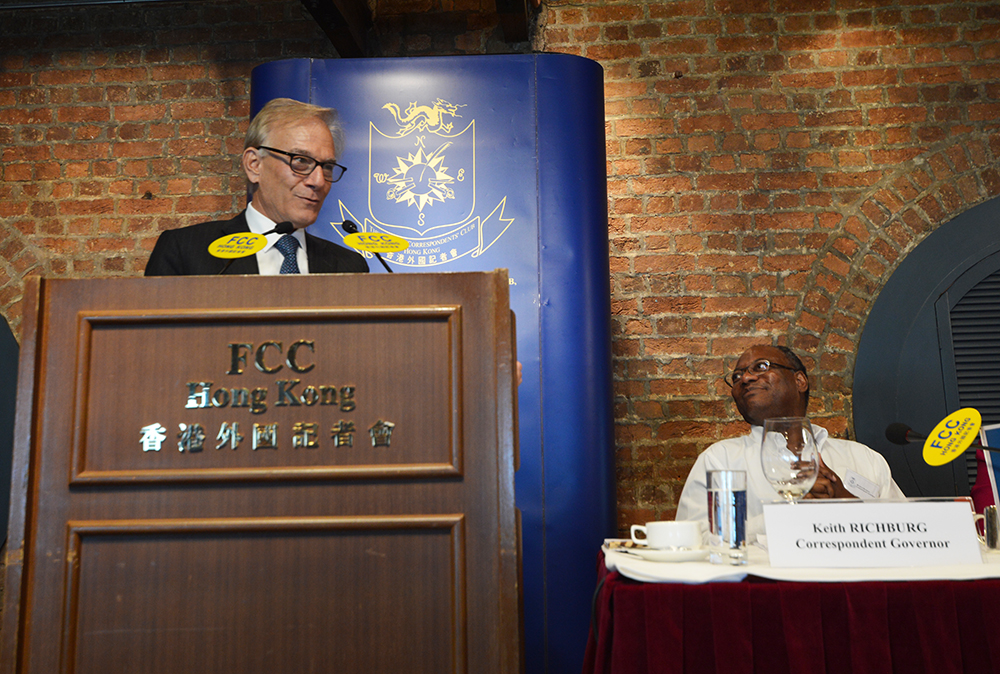 Speaking about his fears for press freedom against the backdrop of increasing global hostility towards the media, fueled in part by US President Donald Trump and his ‘enemies of the people’ rhetoric, Ignatius said news organisations need to remain objective in their reporting to win back support.

The Associate Editor of The Washington Post said it was a dangerous time to be a journalist, citing figures on the reporters currently imprisoned around the world, and urged journalists to “cover the story progressively, we don’t want you to take risks that would lead to death or serious injury”, adding that for editors the hardest thing was to say no to a reporter who wanted to put their safety at risk to get the scoop.

Ignatius also talked movingly of his friend and colleague, journalist Jamal Khashoggi, who was murdered a year ago at the Saudi consulate in Istanbul. The CIA concluded Saudi Crown Prince Mohammed bin Salman ordered the assassination.

“He was a complicated person… he had very extreme views as a young man. Over time he decided the way in which the world would be purified of deep corruption was journalism,” Ignatius said.

Silent Protest to be Held at FCC

How fake news is shaping the Hong Kong protests

The phenomenon of fake news and the spreading of disinformation have increased sharply since the Hong Kong protests began, with conspiracy theories in particular taking off in recent months.

These were the observations offered by three experts who have been covering the protests since June. They were taking part in the September 12 panel on the topic. 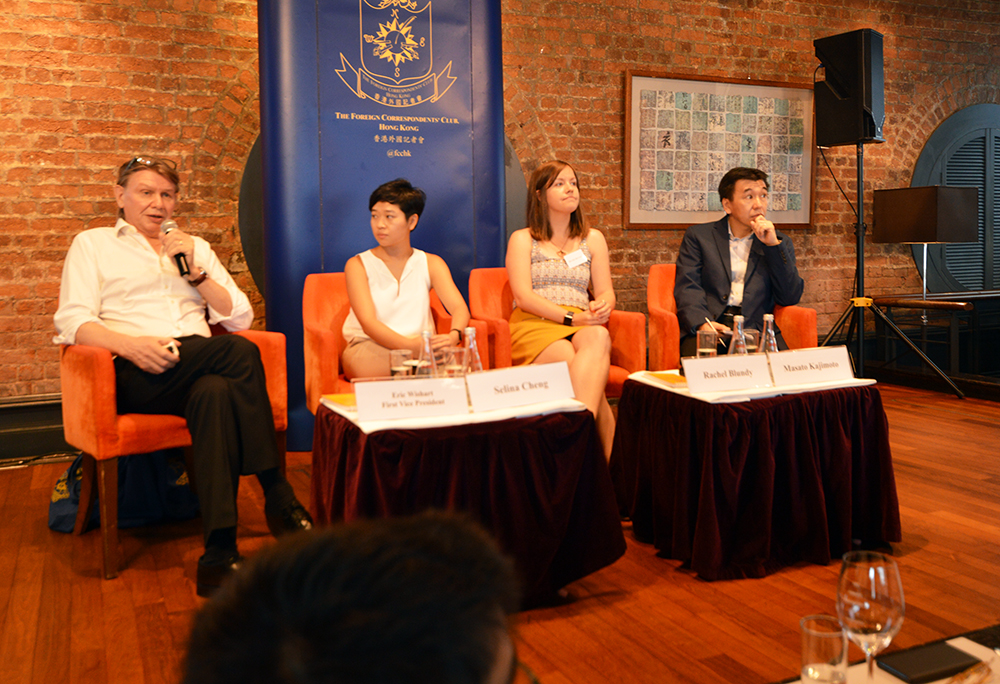 Rachel Blundy, a fact-checker for Agence France-Presse, revealed how her team analyses claims being made on social media and investigates them to debunk fake news. Joining her on the panel was HK01’s Selina Cheng, who gave examples of fake news stories and how they quickly spread. “If the story sounds too good to be true, it probably is,” she said.

Masato Kajimoto, an assistant professor of practice at the Journalism and Media Studies Centre (JMSC), the University of Hong Kong, discussed China’s propaganda war and its attempts to smear the pro-democracy camp through the spread of fake news. He added that the more polarising the topic is, the easier it is for people to believe misinformation.

The discussion was the latest in the FCC’s series of workshops for journalists covering the ongoing Hong Kong protests. You can find the rest of the series here.

The Foreign Correspondents’ Club strongly condemns the increasing number of incidents involving police violence against journalists covering protests in Hong Kong. Assaults of journalists are becoming more serious, undermining the media’s ability to do their jobs and Hong Kong’s commitment to freedom of the press.

The FCC expresses grave concern over multiple eyewitness reports and widely circulating video footage that appear to show police officers spraying pepper spray at close range at numerous reporters and photographers on Saturday night around 10:30p.m. on Nathan Road, including spraying at least two journalists directly in the eyes. Accounts appear to show journalists with press identification—clearly marked vests and helmets–in an area with no protesters directly present near the scene. They did not appear to be interfering with police operations. 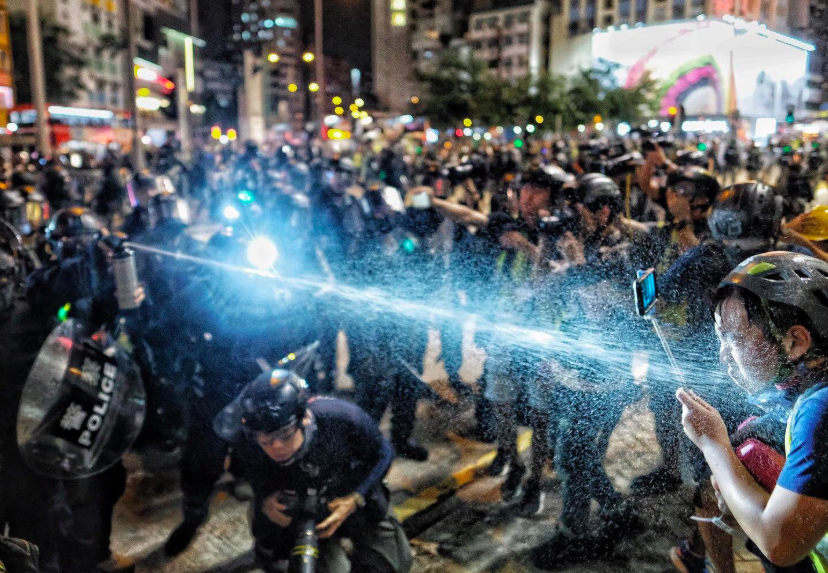 These actions by members of the Hong Kong Police Force are unacceptable and constitute a violation of the right under Hong Kong law for journalists to cover protests free of intimidation or violence by authorities.

The repeated and consistent reports of police violence against journalists covering the protests have become too many for the Hong Kong government and the international community to ignore and seem to be increasing in frequency. Given this deteriorating situation, the FCC reiterates its demand that the government follow the advice of numerous prominent Hong Kong organizations, along with civic and political leaders, and establish an independent commission of inquiry to investigate all forms of violence and intimidation directed at journalists since the start of the protests in June. We urge that such investigations be thorough and transparent.

The FCC also calls on the Commissioner of Police to publicly address these worrying reports and to clearly state that the HKPF respects freedom of the press and the right of journalists to cover events, including police operations, unfettered and free of violence and threats.

The FCC regrets that the Police Commissioner Stephen Lo Wai Chung has failed to respond to its letter to him of August 11 proposing measures that could rebuild confidence between the police and the media, and inviting him to speak at the club.

The Foreign Correspondents’ Club stands with the Hong Kong Journalists Association, the Hong Kong Photojournalist Association and with freelance and unaffiliated journalists in condemning acts of violence directed at the media and in demanding the Hong Kong government and police respect Hong Kong’s long tradition of press freedom.

The Hong Kong Protests: An FCC Workshop Series for Journalists

Since June 2019, journalists in Hong Kong have been on the front lines covering what began as anti-extradition bill protests, often dodging tear gas and rubber bullets in the course of their work.

This FCC series of workshops brings together a wide range of experts, from journalists to tech specialists to health professionals, all of whom offer valuable advice for any media covering the protests.

You can download the Centre of Suicide Research and Prevention’s recommendations on suicide and mental health reporting here.

The Hong Kong Protests: What Next for Hong Kong?

Sharron Fast: A Workshop on the Legal Risks for Journalists

From Water Cannons to the Face Mask Ban: Increased Risks in Covering the Hong Kong Protests