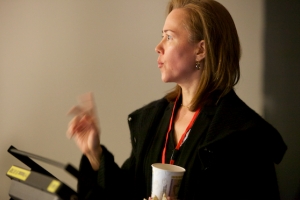 Club Dinner: ”No job for a woman”: The Women Who Fought to Report WWII

Topic: ‘‘No job for a woman’’: The Women Who Fought to Report WWII

Before World War II, war reporting was considered No Job For a Woman. But when the United States entered the war, American women reporters did not want to miss covering the biggest story of the century so they fought for and won access. But there was a catch: women reporters would be banned from the frontlines, prevented from covering Front Page stories about generals and battlefield manoeuvres, and assigned “woman’s angle” stories about nurses and female military personnel. Several refused to abide by these journalistic conventions and military restrictions and, instead, brought home a new kind of war story: one that was more intimate yet more revealing. They reached beyond the battlefield and deep into human lives to tell a new story of war. This 64-minute historical documentary focuses on the lives and work of wire service reporter Ruth Cowan, magazine reporter Martha Gellhorn, and war photographer Dickey Chapelle and bring the story to life.