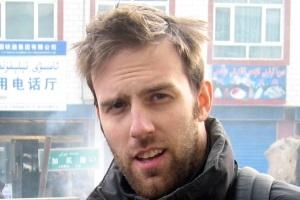 Sparsely populated and spanning more than 1.6 million square kilometers of desert, river basins, mountains, and grasslands, the Xinjiang Uyghur Autonomous Region has had a turbulent history. Many of the events that have occurred there during the last 2500 years have been inextricably associated with its geographical position in northwest China, at a crossroads linking Europe and Asia. Traversed by branches of the series of trade routes that formed the ancient Silk Road, the region has been fought over and controlled by a succession of warlords and empires. Mr. Pyle will share his insights and photos from nearly a decade of exploring ancient footsteps in shifting sands in China’s remote northwest.

Mr. Pyle moved to China permanently in 2002 and in 2004 became a regular contributor to the New York Times. In 2009 Ryan was listed by PDN Magazine as one of the 30 emerging photographers in the world. In 2010 Ryan began working full time on television and documentary film production and has produced and presented several large multi-episode television series for major broadcasters in the USA, Canada, UK, Asia, China and continental Europe.