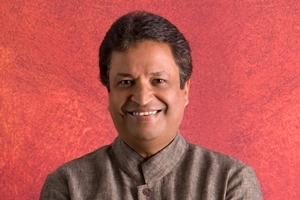 Mr. Binod Chaudhary and his family were spearheading a campaign through his charitable CG Foundation to rebuild their beloved Nepal. Mr. Chaudhary was a leading philanthropist and top industrialist in Nepal, heading the Chaudhary Group which operates over 40 businesses employing 6000 people.

Mr. Chaudhary and his three sons had been rallying support from the international community. The most urgent need that they perceive lies not just in raising money but in building a reliable support system that brings together transport, housing, food and medical support for the local population. The speaker was flying to Hong Kong from Kathmandu specifically to address the F.C.C. He would provide an update on the latest from the ground, discussed how people can help and spread the word, and review the actions he was taking to stem the crisis, rebuilt the nation and bring back business and the trekking community. A passionate trekker himself, Mr. Chaudhary was worried that the global media was forgetting his country after the initial headlines following the earthquake.