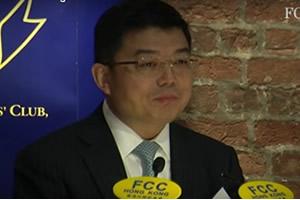 Club Lunch: Rule of Law：The China Story and its Impact on the Future of Hong Kong

Since 2012, the new Chinese administration headed by Mr. Xi Jinping has launched many rule of law programs. The speaker described the main rule of law initiatives, how China would achieve its ambitious rule of law dream, and what impact it may have on Hong Kong’s future, included the implementation of the “one country, two systems” principle and the Basic Law.

Wang Zhenmin is Professor of the Law Faculty at Tsinghua University in Beijing and has been Head of the Law Department of the Hong Kong Liaison Office of the Central People’s Government (General Counsel) since December 2015. He has a PhD in Law from Renmin University of China. His academic fields include Constitutional and Administrative law, and the Hong Kong Basic Law.

This speaker was arranged in coordination with the Office of the Commissioner of the Ministry of Foreign Affairs of the People’s Republic of China in Hong Kong.