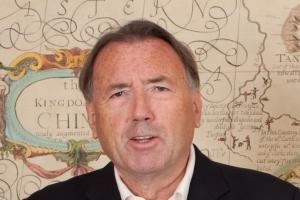 While many have predicted the near-certainty of China’s rise to global supremacy, Mr.Beardson will boldly counter such widely-held assumptions and bring to light the daunting array of challenges that confront China today, as well as the inadequacy of the leadership’s responses. Threats to China come from many fronts and by their number and sheer weight these problems will thwart the nation’s ambition to take over as the world’s “Number 1 power”. Drawing on extensive research and experience living and working in Asia over the last 35 years, Mr. Beardson will spell out the details of China’s situation: an inexorable demographic future of remorseless aging, extreme gender disparity, a shrinking labour force, and even a falling population. Also, the nation faces social instability, a devastated environment, a low-tech economy with inadequate innovation, the absence of an effective welfare safety net, an ossified governance structure, and radical Islam lurking at the borders.

Timothy Beardson founded and ran Crosby International Holdings, the largest investment bank in the Far East. Since the late 1990s he has been a frequent speaker on political, economic, environmental, and strategic issues at such forums as the World Economic Forum at Davos and at prominent universities. He is a permanent resident of Hong Kong.