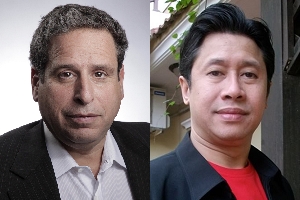 Thailand’s military, seizing power in a May 22 coup following the judicial removal of Prime Minister Yingluck Shinawatra, says a return to civilian rule could take at least a year as it implements political reforms. While the U.S. has denounced the move and some analysts have warned of civil war, some investors, seeing how the economy continued to grow after the 2006 coup that ousted Yingluck’s brother Thaksin from office, have been more sanguine. Mr. Penkair, a founder of the United Front for Democracy Against Dictatorship after the coup eight years ago, and Mr. Amsterdam will explain the motivating factors behind the crisis and ideas to ensure democracy survives.

Jakrapob Penkair, a Fulbright scholar who had studied at Chulalongkorn University, has worked as a foreign ministry official, journalist, Government Spokesman and minister and member of parliament. He resigned from the government after criticisms of his 2007 comments against Thailand’s patronage culture at the FCC Thailand and he left the country after a military crackdown on protesters against the 2008 judicial ouster of the government he had served.

Robert Amsterdam is an international lawyer who has worked on a wide series of politically-prominent cases. He has represented Mikhail Khordorkovsky in Russia, Eligio Cedeno in Venezuela, President Rupiah Banda in Zambia, as well as Dr. Chee Soon-Juan in Singapore and Thaksin Shinawatra and the Red Shirt Movement in Thailand. His clients also include numerous mining and energy companies operating in emerging markets around the world. He is a member of the Canadian and International Bar Associations and is licensed as a Solicitor-Advocate in the United Kingdom.