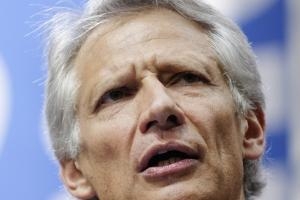 The lessons of the global debt crisis were not learned, and the mistakes that led to it have been compounded, Dominique de Villepin contends. The problems at the root of the crisis include: 1) An imbalance in the markets due to the presence of hegemonic players in the financial system; 2) An inadequate response from central banks attempting through quantitative easing to ‘kick-start’ the economy but instead creating new dangers; and 3) an imbalance in the judicial consequences, leaving unpunished those whose illegal actions in the capital markets increased moral hazard and therefore increased market risk.

Mr. de Villepin was a French diplomat in New Delhi and Washington. In 1995, he led the successful presidential campaign of Jacques Chirac, after which he became secretary general of the presidential palace, foreign minister, and then, in 2005, prime minister. He is now the chairman of the International Advisory Board of Universal Credit Rating Group (UCRG), an organization he sees as being crucial for the transformation of world economic order. He is also an economist, poet and historian.