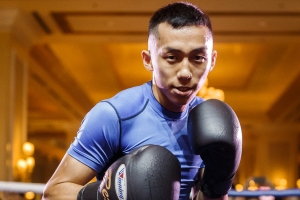 Meet super-flyweight boxing champ Rex Tso, fresh from his recent victory in Macau this month after defeating top Indonesian boxer Espinos Sabu in an eight-round unanimous decision contest. The young fighter will talk about his career, ambitions and how he fought his way up to becoming the first major pugilist to emerge from Hong Kong.

Best known as ‘The Wonder Kid’, Tso has an unbeaten record of 15 consecutive wins, including nine knockouts, since turning pro in September 2011. Highlights in his career include capturing the WBC Asian Boxing Council Continental title in the super-flyweight class in 2012 and earning the WBO Asia-Pacific Junior Bantamweight title at Ring of Gold in Macau in February this year. The young boxer has been ranked #4 in the world in his weight class by the WBO and among the top 10 in the world by the WBC, WBA, and IBF, and has recently added WBC ‘Prospect of the Year, Asia’ in 2013 and WBO ‘Fighter of the Year 2014, Asia-Pacific’ to his accolades. One of the most exciting fighters in Asia, Tso has emerged as a major force in building the sport of pro boxing in Greater China, and is well on his way to a world title next year.

Tso took up the sport in his teens, having fought in various local amateur boxing tournaments, and won three championships under the tutelage of head coach and promoter Jay Lau of DEF Boxing. The Hong Kong-native originally grew up in Tuen Mun; he’s only 27-years old.