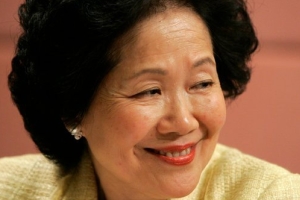 Mrs. Chan retired as the Chief Secretary for Administration of the Hong Kong Special Administrative Region (HKSAR) Government in 2001, after nearly forty years of service. As Chief Secretary, she headed the 190,000-strong civil service. She was the first woman and the first Chinese to hold the second-highest governmental position in Hong Kong.

In recent years, Mrs. Chan has taken a prominent role in the campaign for full universal suffrage for election of Hong Kong’s Chief Executive and all members of the Legislature. In December 2007 she stood as a candidate in a by-election for a seat in the Legislative Council and won by a convincing margin. Mrs. Chan is well known for her stand on transparent and accountable government, on democracy and on safeguarding the rights and freedoms enshrined in the “one country, two systems” concept that applies to Hong Kong.