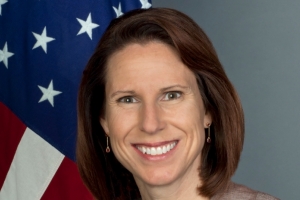 Club Lunch: Women in public policy – Tales from the front lines… from the deserts of Iraq to the steppes of Mongolia

Topic: Women in public policy – Tales from the front lines… from the deserts of Iraq to the steppes of Mongolia

U.S. Ambassador to Mongolia, Piper Campbell, served as the senior civilian representative of the U.S. government in southern Iraq from 2011-2012, establishing a U.S. Consulate General in Basrah and managing continued interaction as the U.S. military departed the country. Ambassador Campbell will discuss her experiences in Iraq and other destinations, as a senior women in public policy.

Ambassador Campbell joined the Foreign Service in 1989 and began her diplomatic career as a consular and administrative officer in the Philippines, and then as a general services officer providing support to the three U.S. missions in Belgium. She went on to serve in the State Department’s Operation Center (1994-1995) and the Bureau of International Organization Affairs (1995-1996) before being seconded to the civil affairs section of a United Nations peacekeeping mission (1996-1998). Ambassador Campbell then opened an office of the U.S. Agency for International Development (USAID) in Eastern Slavonia, Croatia.She also worked on international security and humanitarian issues at the U.S. Missions to the United Nations – in New York (1999-2002) and Geneva (2002-2006) – and served as Deputy Chief of Mission in Cambodia (2006-2009).

Ambassador Campbell holds a Bachelor’s degree from Georgetown University’s School of Foreign Service and a Master’s degree from the Harvard Kennedy School.