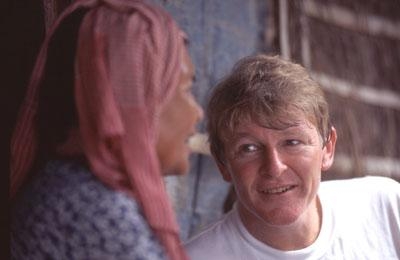 Cambodia was the epicenter of the proxy Cold War. It resulted in civil wars and revolution, tearing apart the nation and creating a diaspora.

“Cambodia Dreams” has a timeless universal theme, the indomitable power of the human spirit to overcome adversity, as seen through the eyes of one divided family. Half of the family stayed in Cambodia, while the other went to refugee camps in Thailand. This seemingly simple story is enriched by the grandmother, YAN Chheing, who has an extraordinary grasp of the complex issues involved. Despite being trapped in a refugee camp for 12 wasted years, this former rice farmer still refuses to become a victim. With remarkable insight she sees with clarity the problems that face all people separated from their heritage, ranging from loss of cultural identity to present day responsibility for the well-being of future generations. YAN Chheing will achieve her dream, becoming a beacon for reunification and reconciliation to the dispossessed of the world. The film runs 65 minutes.

Born in New Zealand, Stanley HARPER studied at the French national film school, IDHEC. In 1985, he wrote his feature film, “Leave All Fair”, starring John Geilgud. Mr. HARPER also produced and directed a documentary for BBC on the Cambodian refugees, then later made his independent documentary, “Situation Zero”. Filming on Cambodia Dreams began in 1991. In between shoots in Cambodia Stanley HARPER worked on other productions such as Roman Polanski’s “Death and the Maiden” (1994) and Helmut Newton’s “Moving Pictures” (1994).