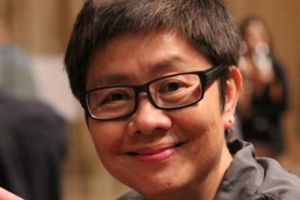 The film “One Tree Three Lives” chronicles the life of the acclaimed novelist Hualing Nieh Engle, now aged 88; the founding and development of the International Writing Program in Iowa, USA; and the restlessness and tribulations facing Chinese people in the 20th Century.

The author of 24 books, including the memoir The Images of Three Lives and the novels The Lost Golden Cicada (1960) and Mulberry Green and Peach Pink (1976), Nieh has been a major influence on generations of writers in the Chinese Diaspora and beyond. In 1967, she initiated the world-renowned International Writing Program with her poet-husband Paul Engle; they were nominated by more than 300 writers for the Nobel Peace Prize in 1976. One Tree Three Lives is also their love story: A novelist and poet who created a strong and visible love.

Nieh has called herself a tree, with roots in China, the trunk in Taiwan, and the many branches and leaves in Iowa, USA. The film reveals a woman of charisma, integrity and determination; a person in continual exile; and an artist with laughter and generosity. Interviews with 26 writers/artists, including Mo Yan, Yu Hua, and Pai Hsien-yung, present a lively variety of viewpoints and anecdotes.

Producer / Director Angie CHEN has directed several award-winning documentary and feature films and received her MFA in Film at UCLA. She is a family friend of Nieh Hualing Engle. Winner of the 2013 HK Film Critics Society’s Film Merit Award, “One Tree Three Lives” has screened at the HK International Film Festival, and at festivals in Taiwan, Singapore, Iowa, England, and at the Asia Society in New York.