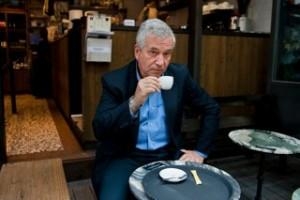 Topic: Why Food Gurus are Crazy and Wonderful

Note: Recipes from the celebrity chefs covered in the book will be served at this gourmet dinner.

Stephen VINES will talk about his new book, Food Gurus – 20 People Who Have Changed the Way We Eat and Think About Food. Some of the people he will be talking about, such as Ferran ADRIA, Antonin CAREME, Julia CHILD, Elizabeth DAVID, Georges Auguste ESCOFFIER, Jamie OLIVER and Alice WATERS, are very familiar, but others have proved to be equally influential yet are lesser known today.

Food used to be about eating and sustenance, but nowadays it has become part of show business. Mr. VINES will discuss how this happened and what it means.

Stephen VINES leads a double life, not only working as a journalist, writer and broadcaster but also running a chain of restaurants, coffee shops and canteens. He worked for The Observer in many capacities and has also been a correspondent for the BBC, Daily Telegraph, The Guardian and The Independent. He was the founding editor of Eastern Express, and the founder and publisher of Spike, a pioneering political and business weekly magazine. He is the author of several books, including: Hong Kong: China’s New Colony, The Years of Living Dangerously – Asia from Crisis to the New Millennium and Market Panic.