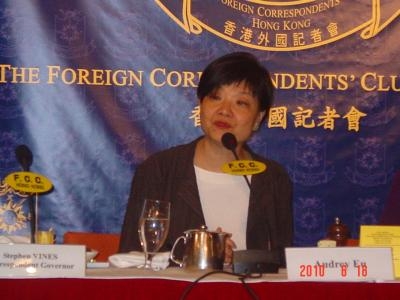 Speaker: Audrey EU
Leader of the Civic Party
Topic: The morning after the debate – what next for political reform in Hong Kong

On Thursday 17th June Hong Kong experienced the first televised debate between the Chief Executive Donald TSANG and Audrey EU, one of his leading opponents, on the subject of constitutional reform. This comes towards the end of an unprecedented government campaign to persuade legislators to vote for its reform measures and against a background of mounting political activity pressing for a higher level of democracy. Ms EU spoke both about the debate and her views on how opponents of the government intend to pursue their campaign.

Audrey EU is the Leader of the Civic Party and one of its founders. She is also a distinguished barrister and one of the most high profile members of the Legislative Council.