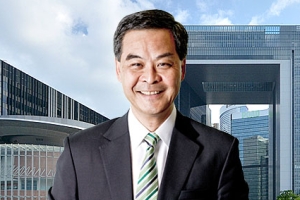 Topic: Hong Kong – The Next 5 Years

Mr. C.Y. LEUNG took office as the fourth term Chief Executive of the Hong Kong Special Administrative Region on July 1, after his election in March on a platform including more affordable housing, tackling pollution, delivering universal suffrage for the next chief executive election and protecting the city’s freedoms and rights while developing closer ties with Mainland China.

A graduate of King’s College, Hong Kong Polytechnic and Bristol Polytechnic, Mr. LEUNG was Chairman of the Royal Institution of Chartered Surveyors Hong Kong, President of the Institute of Surveyors in Hong Kong and Asia Pacific Chairman of DTZ. Between 1984 and 1997, he was involved in the preparatory work for the establishment of the Hong Kong Special Administrative Region. Between 1997 and 2011, Mr. LEUNG was a member of the Executive Council of Hong Kong and was the Convenor of the non-official members between 1999 and 2011.