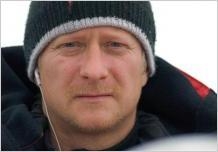 Climate change has brought the Arctic back into the public consciousness as warmer temperatures reveal new shipping channels and open the door to natural resources long locked away by the ice. While politicians debate the laws of ownership and scientists warn that the Arctic is at a tipping point, its people, the Inuit, are caught in the middle as their home and the few remaining traces of their culture melt away.

This summer, Mr. Cameron DUECK, the leader of a four member Open Passage Expedition ,will sail a 40-foot yacht through this treacherous route in order to tell the story of how climate change is affecting Arctic communities. He will share with the audience the multifaceted challenges encountered in preparing for this Expedition.

While scientists are spending countless hours compiling valuable data which proves the Arctic is undergoing unprecedented change, this expedition hopes to bring to life the true drama taking place in the Arctic through writing, photography, film and art. The goal of the expedition is to tell this story in a way which captures the imagination and brings the message of climate change to a broader audience.

Cameron DUECK, a Canadian journalist based in Hong Kong, is the leader of the Open Passage Expedition and is planning to write a book on the voyage. Currently an assistant editor at the Financial Times, he was previously a senior reporter at the South China Morning Post. Prior to that he worked as a reporter for a variety of newswires in the US, UK and Singapore. Cameron is a passionate yachtsman and holds a Royal Yachting Association Offshore Yachtmaster certificate. In 2004 he quit his job in Singapore and spent a year at sea, boat hopping from South East Asia to the Caribbean, and it was during that voyage that the idea for the Arctic adventure was borne.