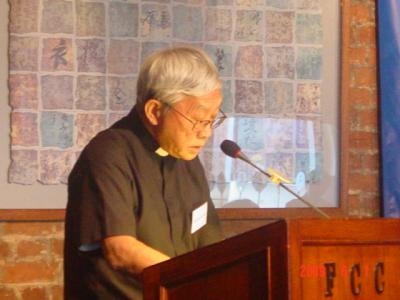 Cardinal Joseph ZEN will share his thoughts 3 days before the 20th anniversary of Tiananmen Square.

Cardinal ZEN was born in Shanghai on January 13, 1932. In July 1948 he came to Hong Kong to join the Salesians of Don Bosco. He went to Rome to further his studies during the period 1955 – 1964 and obtained the degrees of Doctorate in Philosophy and Master in Theology. He was ordained to the priesthood in Turin on February 11, 1961.

He returned to Hong Kong to teach at the Salesian House of Studies (1964 – 1970) and has been teaching theology and philosophy at the Holy Spirit Seminary since 1970. He was made the Provincial of the Salesian Chinese Province in 1978 and held the post till 1983.

From 1989 to 1996 he has been spending 6 months every year to teach at several Regional Seminaries in China (Shanghai, Wuhan, Xian, Shijiazhuang, Beijing, Shenyang).

Cardinal ZEN will be addressing the club as part of a series of speeches by prominent people as we celebrate the 60th anniversary of the establishment in Hong Kong of the Foreign Correspondents’ Club.