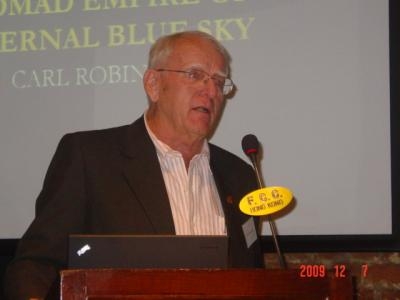 The popular image of Mongolia is a vast and featureless landscape of grassy steppe and sandy deserts sprawled across the top of Asia between China and Russia. But the reality is much more diverse – and inviting. Mongolia also has soaring snow-capped mountains, forested ranges and bare outcrops, plus hundreds of rivers and lakes, including one of the world’s largest freshwater lakes. Mongolia’s rich animal life, both wild and domesticated, is totally absorbing. And its nomadic people are certainly among the most hospitable on earth.

With a reporter’s eye and historian’s ear, former Vietnam War correspondent and veteran Australia-based foreign correspondent Carl ROBINSON will take guests on a highly-descriptive, factual and sometimes quirkily personal journey around this vast nation of only three million people who are far outnumbered by their domesticated horses, goats, sheep, cattle and camels. Mr. ROBINSON will focus on the geography, nature, history, people and culture of Mongolia. He will do a virtual tour around Mongolia explaining its amazing diversity.

Carl ROBINSON was born in America, first came to Asia as a university student in Hong Kong in 1963 and then spent nearly a dozen years in South Vietnam, first as an aid worker and then as a journalist with The Associated Press (AP) until the Fall of Saigon in 1975. Two years later, he moved to Australia and worked for Newsweek magazine,and later opened a popular Vietnamese restaurant in Sydney. He is the author of Odyssey’s guide to Australia, first published in 1990, worked at the Sydney 2000 Olympics. An extended visit to Mongolia in 2008 opened his heart and mind to this fascinating country, inspiring this new Odyssey Guide. His new book is published by Odyssey Publications and is entitled Mongolia: Nomad Empire of Eternal Blue Sky