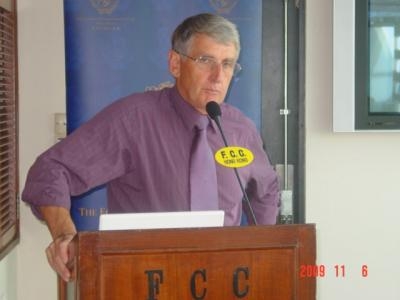 Dr. ANDERSON made an educational film in 2004 on dog bites and rabies prevention. He was horrified by the harrowing specter of people, mainly children, dying from rabies, and by what he saw in dog bite clinics in India and the Philippines. In particular he started to ask questions about the low use (2% in India) of Equine Rabies Immunoglobulin (RIG), injected into the wounds for victims of rabid dog bites. Without RIG, the virus is free to replicate locally, enter peripheral nerves and travel to the brain, where it inevitably causes death from hydrophobia and a peculiarly terrifying and painful form of encephalitis, in which consciousness is retained until the last. If this problem is not addressed, rabies will continue unabated at a global rate of at least 150 deaths a day, 90 percent of which are in Asia and Africa, and half in children.

In this talk, Dr. ANDERSON will argue the case that the current WHO guidelines, cobbled together over nearly 40 years, are a principal cause of this scandalous situation. Engulfed in red tape, they make RIG unaffordable to all but the wealthy few. Having written a review paper on the subject two years ago, he was recently invited to speak at a meeting of WHO advisors which took place in Annecy in France, and was dismayed by their procrastination and a complete lack of a sense of urgency over an issue absolutely central to reducing world deaths from rabies.

David ANDERSON qualified in Medicine at St Andrews University in 1963, and for 16 years was Senior Lecturer, then Professor of Endocrinology at the University of Manchester. From 1991 to 1994 he was Professor of Medicine at the Chinese University of Hong Kong. He then worked in private practice in Hong Kong for 14 years, while continuing as Honorary Visiting Professor at Manchester; he is now retired and living in Italy. As well as more than 150 scientific papers, chapters and books, he is the author of 59 medical teaching films.