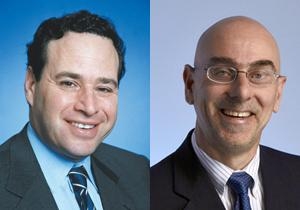 Topic: Demographic change and the future of American politics

David FRUM and Ruy TEIXEIRA, leading American political analysts, will discuss how demographic trends are transforming American politics, society and culture. These changes are large, important and will produce, over time, an America that is far different, and with different policies, than the one that exists today. FRUM, a conservative, and TEIXEIRA, a liberal, will discuss and debate these long-term changes from their differing perspectives. The speakers will provide insight on the political process and how the U.S. arrives at certain policies vis a vis the rest of the world, including China.

David FRUM is the author of six books, most recently, Comeback: Conservatism That Can Win Again. In 2007, the British newspaper Daily Telegraph named him one of America’s fifty most influential conservatives. Mr. FRUM is a regular commentator on public radio’s Marketplace and a columnist for The Week and Canada’s National Post. He also edits the NewMajority.com website. He is currently at work on a book about the decline of the Republican Party in California since 1990.

Ruy TEIXEIRA is a Senior Fellow at both Center for American Progress and The Century Foundation, as well as a Fellow of the New Politics Institute. He was recently a Visiting Fellow at the Brookings Institution. He is the author or co-author of six books, including Red, Blue and Purple America: The Future of Election Demographics. He also writes the weekly feature, “Public Opinion Snapshot,” which is featured on the CAP and TCF websites.

The speakers’ visit to Hong Kong is sponsored by the U.S. Consulate General in Hong Kong.