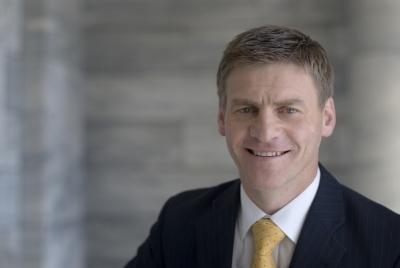 Throughout 2010, aftershocks from the global financial crisis continued to ripple around the world. And, in February 2011, the tectonic plates dealt New Zealand its biggest aftershock yet with a magnitude 7.2 earthquake in the city of Christchurch. Off the back of an earlier Christchurch earthquake, blizzards in Southland, drought in Northland, and the loss of life in the Pike River Mine, it was the last thing the country needed. But, while all newsworthy, these economic trembles do not materially change New Zealand’s economic situation or the Government’s wider programme. They simply make the task of returning to budget surplus, and getting on top of Government debt, a little more difficult.

After delivering his third Budget on 19 May, New Zealand’s Deputy Prime Minister and Minister of Finance, Hon Bill ENGLISH, will talk about the country’s economic outlook, the Government’s plans for getting Christchurch back on its feet, and building stronger economic growth based on savings, investment and exports.

Mr ENGLISH was first elected to Parliament in 1990. In 2008, he was appointed Deputy Prime Minister, Minister of Finance and Minister for Infrastructure in a new National-led government.