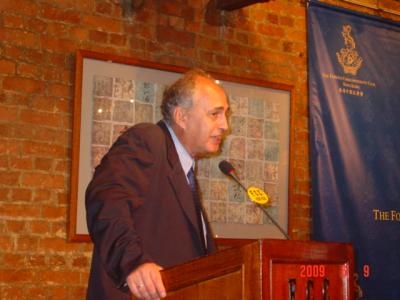 Topic: The City of Heavenly Tranquility

What does the destruction of old Beijing tell us about attitudes to history and China’s great cultural legacy? Mr.Jasper BECKER will discuss the efforts to resist the demolition of Beijing and the remaking of the city’s history.

Mr. BECKER will share his insights from his book, “The City of Heavenly Tranquility”, which recounts the extraordinary untold tale of how the Chinese government is flattening historic Beijing, and attempting to remake the collective memory of its people. In the summer of 1997, President JIANG Zemin made a decision to destroy the old city. There was no announcement, no explanation given, nor any attempt made to justify his decision. Even those working as architects only became aware of what was happening when it was already too late. Expertly moving between historical analysis and reportage, Mr. BECKER will describe the impact of this systematic destruction, a unique telling of the history of Beijing that encapsulates both the grandeur of its creation and the tragedy of its current transformation.

Jasper BECKER was the publisher of Asia Weekly magazine and has worked as a correspondent for over 20 years. He has written 5 other books including 4 on China which has been translated into 7 languages. His “Hungry Ghosts”, the first account of China’s famine during the period known as the Great Leap Forward (1958 – 1962), won the 4th PIOOM Foundation Award for a work on major human rights abuses. His articles on North Korea won the Kilpatrick Award for Human Rights. He has contributed features and political commentaries to The New York Times, International Herald Tribune, The Asian Wall Street, Business Week, National Geographic and London Review of Books. He is also Managing Director of Legend Strategic Consultancy, which provides international companies with information on China.

Mr. BECKER will be addressing the Club as part of a series of speeches by prominent people as we celebrate the 60th anniversary of the establishment in Hong Kong of the Foreign Correspondents’ Club.