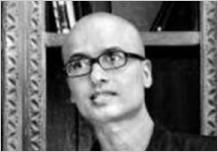 Topic: MUMBAI: FACT AND FICTION – Beneath the glitz of Big Bucks and Bollywood – the world of drugs

Jeet THAYIL, an established poet with several anthologies to his name, has made his debut into the underworld of narcotics with his first novel, Narcopolis, which has been short-listed for the prestigious Man-Booker Prize for this year.

The novel deals with the haze-filled world of drug dens in Mumbai in the late 1970s. Highly praised by literary critics, it has been ranked by The Guardian newspaper with classics such as William BURROUGH’s Junky and Thomas de QUINCEY’s Confessions of an English Opium Eater.

Mr. THAYIL will be in town to attend the Hong Kong Literary Festival in October.