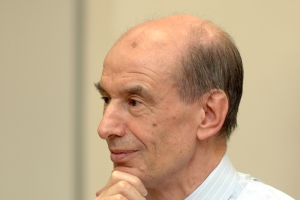 Topic: How safe are the world’s banks?

After the worst losses in history, the world’s leading banks have bounced back with generous help from the taxpayer. Despite widespread public anger at the mismanagement and misconduct that led to the global financial crisis, none of the officials responsible for financial stability lost their jobs and few bankers have been prosecuted. The pace of financial reform is astonishingly slow. Leo GOODSTADT will discuss what the implications are for Hong Kong and the Mainland.

Leo GOODSTADT’s latest book, Reluctant Regulators: How the West Created and China Survived the Global Financial Crisis will be launched at this lunch. He will explain why American and British officials failed to halt the market abuses behind the 2007 financial meltdown; how China’s banks were hit; and why Hong Kong suffered such limited damage.

Before Mr. GOODSTADT’s appointment as Head of the Central Policy Unit (1989-97), he had extensive experience of banking, both as a consultant economist and as a journalist with the Far Eastern Economic Review, Euromoney and Asiabanking. He is also the author of Uneasy Partners: The Conflict between Public Interest and Private Profit in Hong Kong.