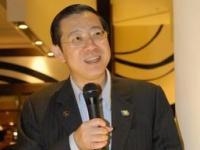 After their best-ever results in 2008, Malaysia’s Democratic Action Party (DAP) and its allies Parti Keadilan Rakyat and Parti Agama SeMalaysia aim to oust the United Malays National Organisation (UMNO)-led government at elections due by early next year.

DAP Secretary General LIM Guan-eng will talk about why he thinks the country may reject UMNO at the polls for the first time in history, and a change of government won’t be accompanied by the violence and suspension of parliament the multi-racial country saw after elections in 1969.

LIM, who is also Chief Minister of Malaysia’s Penang state, was first elected to Malaysia’s parliament in 1986. He was detained the following year for 18 months without trial under the Internal Security Act.

In 1998, LIM was sentenced to jail for sedition following his attempt to champion a Malay woman who had alleged that she was raped by a top ruling party politician; charges against the politician were later dropped by prosecutors.