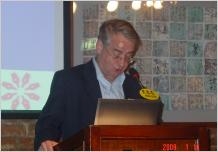 Topic: Media most murderous: they shoot journalists in the Philippines

Ms. MANGAHAS will give a first person account of the current challenges facing her profession. The Philippine press by all accounts is the least fettered in Southeast Asia. The Philippines is also the second deadliest place in the world for journalists, after war-torn Iraq. Since 1986, when the first “People Power” movement restored democracy, 98 journalists had been murdered, mostly in the line of duty. About two-thirds, or 62 cases, had been recorded since President Gloria Macapagal Arroyo came to power in 2001. Last year alone, eight Filipino journalists were killed.

The motives and the perpetrators vary – cops and soldiers, private goons of local officials intolerant of critical media, rebels and paramilitary forces. Only five cases are being tried in court. The vast majority are reduced to mere statistics by a culture of impunity that afflicts conflict-ridden Philippine society – weak rule of law, an ineffective judicial system, poor police investigation, few and frightened witnesses, inadequate funds to file suit and prosecute, and indifference by the authorities toward the clamor for justice by media groups and the victims’ kin.

Malou MANGAHAS is a co-founder and executive director of the Philippine Center for Investigative Journalism (PCIJ) whose exposes on the mansions, mistresses, and unexplained wealth of former movie actor and president Joseph ESTRADA led to his ouster in 2001. A Nieman Fellow (1999) at Harvard University, Malou became the youngest editor in chief of a Philippine national daily (The Manila Times) in 1994. She had worked as senior correspondent for Reuters-Manila, editor in chief of www.gmanews.tv; and anchor, executive producer and vice president for Research and Content Development of the Philippines’ top TV network, GMA 7. Malou is a trustee of the Southeast Asian Press Alliance (SEAPA), board member of the Freedom Fund for Filipino Journalists, and advisor for Asia-Pacific of the Washington-based International Center for Journalists (ICFJ).