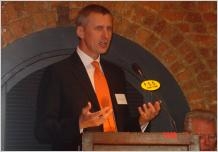 Martin WHEATLEY will talk about regulatory challenges and responses in the midst of the financial tsunami. The collapse of Lehman Brothers has had significant consequences on both the international and domestic financial markets. The events that have subsequently unfolded have suggested a need for a thorough review of local regulatory structures as well as more international co-operation in the supervision of markets and their participants. Mr WHEATLEY will discuss what he believes went wrong and what should be the way forward in the financial regulatory sphere.

On an international scale, Mr WHEATLEY will share his views on current short selling regimes and how he, as the Chairman of the IOSCO Short Selling Task Force, sees and handles contrasting opinions from different jurisdictions in aiming to arrive at a common international standard on the regulation of short selling. Domestically, Mr WHEATLEY will speak on what he believes could be improved upon in the financial regulatory system in Hong Kong and on what will likely become the regulatory focus in the aftermath of the crisis.