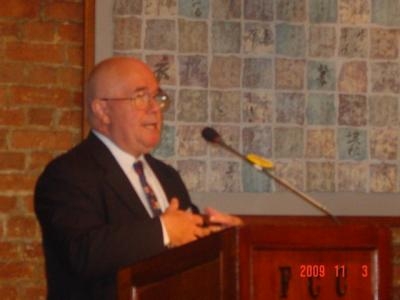 The Accountability system, whereby a layer of Ministers and other political appointees has been installed on top of the civil service, is now seven years old. Yet there is still confusion about the relationship between Ministers, their deputies and civil servants, and their relative responsibilities. Finally in September formal guidelines were issued to try to make the situation clear.

But in recent weeks, civil servants have been on the TV and radio defending political decisions. Moreover, whenever there is a cabinet reshuffle, the Chief Executive inevitably draws on the Administrative Grade to fill some of the vacancies. How is that defending the civil service against politicisation?

And six years almost to the day after the last of the Rolling Stones concerts, there is still no clue as to the identity of the Minister for HarbourFest. Mr. ROWSE will examine these and other mysteries in his talk. He also has a new book out, “No Minister & No, Minister” sub-titled “The true story of HarbourFest”.

Mr. ROWSE first came to Hong Kong in 1972. He became the first Director of the Financial Secretary’s Office from 1997 – 2000, and from 1999 – 2000 was appointed concurrently as the first Commissioner for Tourism. He was the lead negotiator with the Walt Disney Company which resulted in the building of Hong Kong Disneyland. In July 2000, Mike set up Invest HK, the investment promotion agency established by the Hong Kong Government, and was its first Director-General up to his retirement in December 2008. The agency won several awards during his tenure and was recently recognized as the best investment promotion agency in Asia. Mr. ROWSE received his BSc in Economics in the UK. He was the first overseas civil servant in HK to have naturalized as a Chinese Citizen.