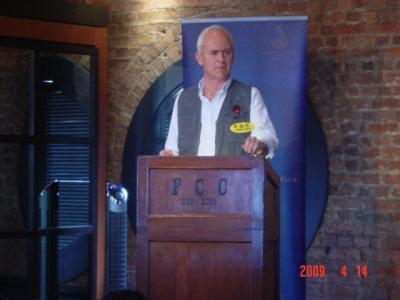 Mr. Nick DAVIES, an award – winning journalist, is in Hong Kong as one of the guest speakers of Hong Kong Baptist University’s conference on international news and journalism .

When Mr. DAVIES decided to break Fleet Street’s unwritten rule by investigating his own colleagues, he found that the business of truth had been slowly subverted by the mass production of ignorance. In his book, Flat Earth News, Mr. DAVIES attempts to expose falsehood, distortion and propaganda in the global media. Working with a network of off-the-record sources, Mr. DAVIES uncovered the story of the prestigious Sunday newspaper which allowed the CIA and MI6 to plant fiction in its columns; the daily newsroom where senior reporters casually refer to ‘nig nogs’ and where executives routinely reject stories about black people; the respected quality paper which was so desperate for scoops that it hired a conman to set up a front company to entrap senior political figures. He found papers supporting law and order while paying cash bribes to bent detectives and hiring private investigators to steal information. He shows the impact of this on a world where media consumers believe a mass of stories which, in truth, are as false as the idea that the Earth is flat – from the millennium bug to the weapons of mass destruction in Iraq, tainting government policy, perverting popular belief.

Nick DAVIES has been named Journalist of the Year, Reporter of the Year and Feature Writer of the Year for his investigations into crime, drugs, poverty and other social issues. He has been a journalist since 1976 and is currently freelance, working regularly as special correspondent for The Guardian. He was the first winner of the Martha Gellhorn award for investigative reporting for his work on failing schools and recently won the award for European Journalism for his work on drugs policy.