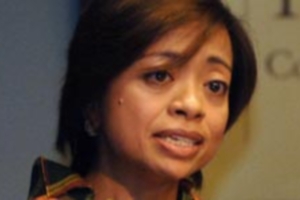 Benigno AQUINO III was sworn in as the President of the Philippines on June 30, after a landslide election victory. In his inaugural speech, he said, “If no one is corrupt, no one will be poor. That is no mere slogan for posters. It is the defining principle that will serve as the foundation of our administration.” Can President AQUINO deliver? Can he succeed where his predecessors, including his mother, failed?

Sheila CORONEL is Toni Stabile Professor of Professional Practice in Investigative Journalism at Columbia University. She reported on human rights abuses and the growing democratic movement as Ferdinand MARCOS gradually lost political power, as well as the election of Corazon AQUINO. As a stringer for The New York Times and The Guardian, she covered seven attempted coups d’etat against the AQUINO government. In 1989, Professor CORONEL and her colleagues founded the Philippine Center for Investigative Journalism, which trains investigative journalists. She has written and edited several books, including Coups, Cults; Cannibals and Pork and Other Perks: Corruption and Governance in the Philippines.