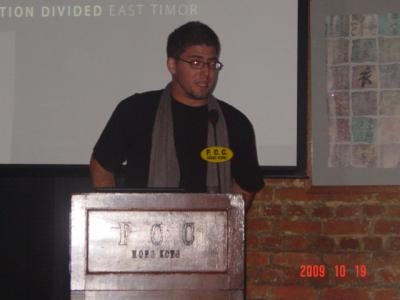 To coincide with an exhibition of Dominic NAHR’s photographs on the FCC Wall, which opens 19 October, award-wining photographer NAHR will discuss his work and challenges as a photojournalist working in some of the world’s most troubled locations. Most recently, NAHR has worked in the Democratic Republic of Congo, formerly known as Zaire, where more than 5 million people have been killed in the most deadly conflict since World War II.

“Congo is magical, very frustrating at times, but magical”, says NAHR. As a photojournalist “At first you feel like a scavenger because you are hanging over these bodies, but you have to document it. This had to be remembered.”

NAHR was born in Switzerland, raised in Hong Kong and studied at Ryerson University in Canada and is currently based in Nairobi, Kenya. He started his career as a staff photographer for the South China Morning Post and has recently worked as a free-lance photographer on assignment in Gaza for AFP, East Timor for the New York based photo agency Polaris Images and for a variety of magazines, including Newsweek, GQ Magazine and Macleans; his work has also featured in the New York Times, The Guardian, Time, Sunday Times Magazine and BBC Online. He recently received the prestigious Leica Oskar Barnack Newcomer Award for his photographic essay in Congo: The Road to Nowhere.