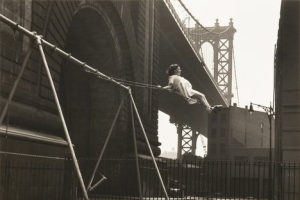 This is a feature-length documentary film made by Nina ROSENBLUM and Daniel ALLENTUCK, which tells the story of the rise and politically motivated fall of the Photo League, (1936–1951) which for fifteen years served as the center of the documentary movement in American photography at a time when the camera was held to be, in James AGEE’s words, “the central instrument of our time.”

“Ordinary Miracles” is built around a handpicked selection culled from the hundreds of images made by approximately sixty individual League photographers, fashioned into sequences designed around various subjects of League focus (Harlem, the Lower East Side, children at play, Coney Island, WWII). The previously under-reported contribution of Photo League trained war correspondents and combat cameramen who served in all branches of the armed services during WWII is rectified in an exciting sequence devoted to the Photo League’s war. The rich and evocative soundtrack is a blend of contemporary and vintage music: The Mills Brothers, The Ink Spots, Django Reinhardt, The Andrews Sisters, Fats Waller, Coleman Hawkins and Philip Glass.

Photographer Carsten SCHAEL will introduce this documentary. He will be joined by video producer Mark ERDER and journalist Richard HORNIK for a Q&A session after the screening.

There was a documentary screeing session in this club event. However, due to copyright concern, the documentary is excluded in this video.