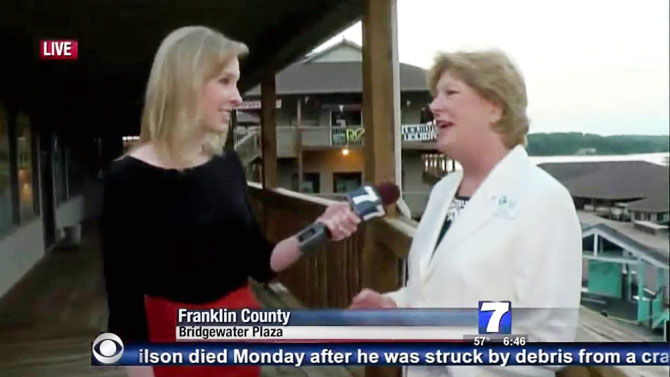 Alison Parker (left) the moment shots ring out during an interview on tourism with Vicki Gardner, the local chamber of commerce director, before she was shot and killed. (AFP screen capture) 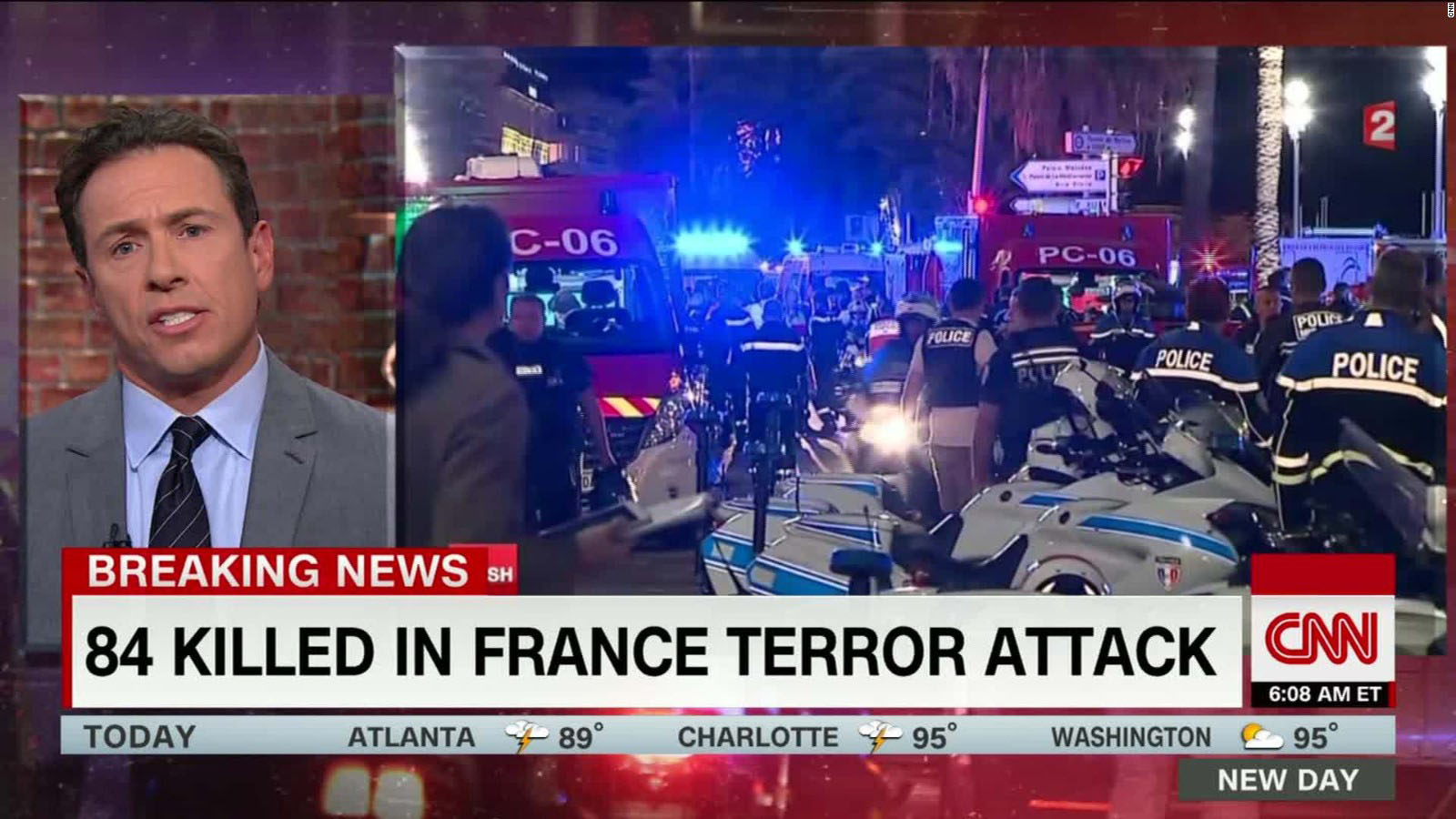 Following the Nice truck terror attack the French media watchdog, the CSA, issued an appeal for ‘caution’ and ‘restraint’ and the French police called on people to stop uploading images of victims as a sign of respect for them and their families. (CNN screen capture)

From hostage beheadings in Syria to police shootings in the US, graphic social media uploads have become an essential part of telling the story.

The seemingly endless series of horrors so far in 2016 – Istanbul, Baghdad, Brussels, Nice, Dallas, Orlando – has been captured by an equally endless army of amateur eyewitnesses using their smartphones. Their work has given unprecedented access to events as they happen – and has also provided a daily diet of horrific, graphic imagery that journalists have to process, verify and publish.

Guidelines on dealing with these challenges formed a major part of a new of set of editorial standards and best practices that I drew up for AFP news agency earlier this year. (https://www.afp.com/sites/default/files/paragraphrich/201606/22_june_2016_afp_ethic.pdf).

The challenge was to find the balance between the public’s right to know and exposing people to disturbing content that studies have shown can cause PTSD, or visceral trauma, among news consumers.

The AFP guidelines recommend that editors decide if graphic imagery adds to the understanding of the story in an essential way, or only appeals to morbid interest. Is it within the acceptable limits for a major media outlet? Does it cross the line into gore (dismembered limbs, mutilated bodies, executions, moment of death)? Will it cause distress to viewers or to the victim’s family? Does it damage the dignity of the people involved?

From experience, these are not the easiest questions to answer in the heat of the moment when a major news story is breaking.

Television networks are in the front line when it comes to deciding what material to publish, and an unprecedented amount of graphic amateur imagery is finding its way into our living rooms via the TV news.

To find out how two of the biggest networks handle these challenges I spoke to CNN’s Hong Kong bureau chief Roger Clark and to Jon Williams, managing editor of international news at ABC News.

Clark, speaking at CNN’s offices in Hong Kong, said the network has strict procedures in place and that there has to be “strong editorial justification” for using social media content.

“We ensure that if we are using graphic content we discuss it first, we vet it, we make sure we put up warnings on screen, we use verbal warnings. We do not use the pictures gratuitously,” he said. “We have strong taste and decency policies at CNN”.

And what are the criteria for using graphic content?

“On one hand you don’t want to sanitise the news to such an extent that the audience doesn’t know what is going on, but at the same time you have to draw the line somewhere in terms of taste and decency and your position can evolve on certain stories.”

One example was CNN’s decision to broadcast edited footage from one of the first beheading videos uploaded by ISIS: “That video shocked the world but you don’t have to do that all the time – the point has been made; you don’t have to keep on making it.”

Clark has enthusiastically embraced the arrival of amateur eyewitness media.

“We are getting eyewitness accounts of events in video form that we would never have had before social media, so it is a wonderful development as far as news gathering is concerned,” he said.

“But with that comes added responsibility to make sure that we use the content responsibly and that we make sure that when we have sensitive material there is a robust discussion involving our standards and practices people as well as other senior editorial figures”.

Jon Williams said that the New York-based ABC News has a standards department that has to clear all content for use.

“ABC would never show the moment of death for instance,” he said in a phone interview during a visit to Beijing in August.

The increase in the use of graphic imagery is a “particular phenomenon of 24-hour news channels”, but more by accident than design, he said.

“If graphic images are appearing on air, 99 out of 100 times it will be because the people who are in the control rooms are inexperienced, or overwhelmed, or both. And that is why some content will air once and then never again – when wiser heads prevail it is back to business as usual”.

Are the networks rushing to broadcast amateur video because they feel pressure from social networks?

“We are in a different business – you have to capture the drama of events that are unfolding but you also have to provide the context and the analysis”.

“The audience does not want the networks to play social media at their own game.”

Iain Martin, the Asia editor at Storyful, believes that social media have had an impact on the kind of imagery that is being broadcast.

“There has been a shift in what news organisations are willing to show to the public and it is very much being driven by what is being captured by users and what users are showing on social media,” he said.

Storyful, whose Asia headquarters are in Hong Kong, gathers, verifies and obtains rights for uploaded amateur content and then delivers it through its newswire to media clients.

It leaves the decision on whether to publish graphic content to its clients and does not pre-edit material.

“We publish the full content to our private newswire; we do not make assumptions about our clients’ editorial judgement. It is up to our clients – TV stations or online news organisations – how they want to publish it, it is their call”.

Like all news organisations that have to process graphic content, Storyful must deal with the health risk posed to their staff by vicarious trauma. It has guidelines for the handling of graphic content and a counselling service available to journalists – procedures that are being adopted throughout the news industry to meet the challenges of processing disturbing material.

Claire Wardle, research director at the Tow Center for Digital Journalism at Columbia School of Journalism in New York, told me that while the established media have systems in place to deal with the flood of social media content, newer media outlets are still finding their way.

“These policies and standards have to be worked out now, particularly in newer publications that have not had time to think through ethical guidelines in the same way.”

Wardle, a frequent visitor to newsrooms in the US, holds regular workshops on handling social media and sees a change in the use of disturbing content.

“Media historians will look and say that there is a shift. In the conversations I have had in newsrooms over the last year journalists are saying they are publishing more graphic imagery than before because audiences have already seen it.”

“News organisations are feeling pressure that audiences are going to social networks. There is a sense of ‘they are seeing it anyway so how do we remain relevant if we do not have the go-to video or image that everybody is circulating’?” 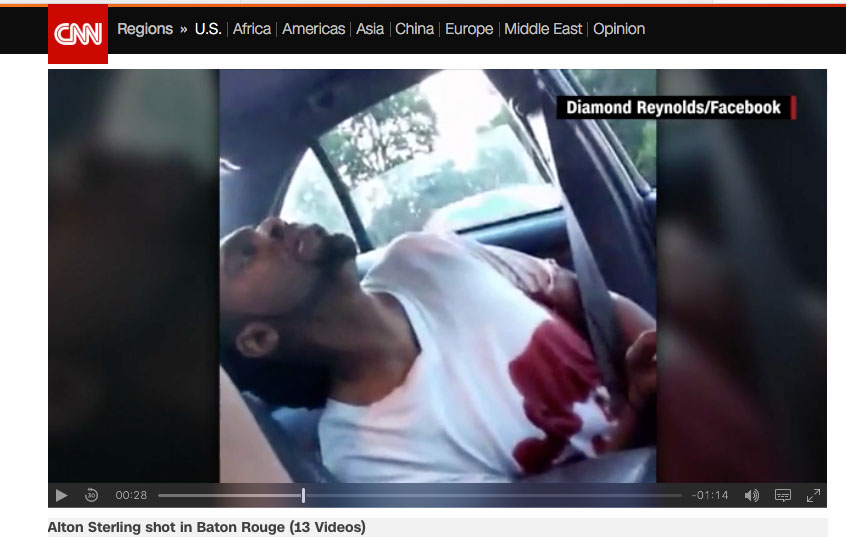 The arrival of live streaming video on social networks like Facebook and Periscope has added a new dimension to the social media dilemma for news outlets.

The issue came to the fore in the most shocking way when Diamond Reynolds live streamed on Facebook her boyfriend Philando Castile bleeding to death as a policeman pointed a gun at them through their car window.

Wardle has just produced a report on the media coverage of the video:

Handling of the video varied widely, with some news outlets using screen grabs while others ran the entire footage. But one thing is clear in Wardle’s conclusions: “Reynolds’ calm and dignified use of Facebook Live, and the resulting mainstream news coverage, will undoubtedly encourage more people to use the new feature when they find themselves in similar situations.”

As journalists grapple with the daily challenges of social media uploads, CNN’s Roger Clark offered a succinct and timely piece of advice: “Just because you can show something doesn’t necessarily mean you should.”

A former editor-in-chief of AFP, Eric Wishart is responsible for special projects with the Agency’s global news management. He recently wrote an ethics charter  for the Agency that includes detailed guidelines for the use of social media in news gathering.