China’s move to silence its critics in order to portray a more positive image is now reaching far beyond its borders, according to a new report. 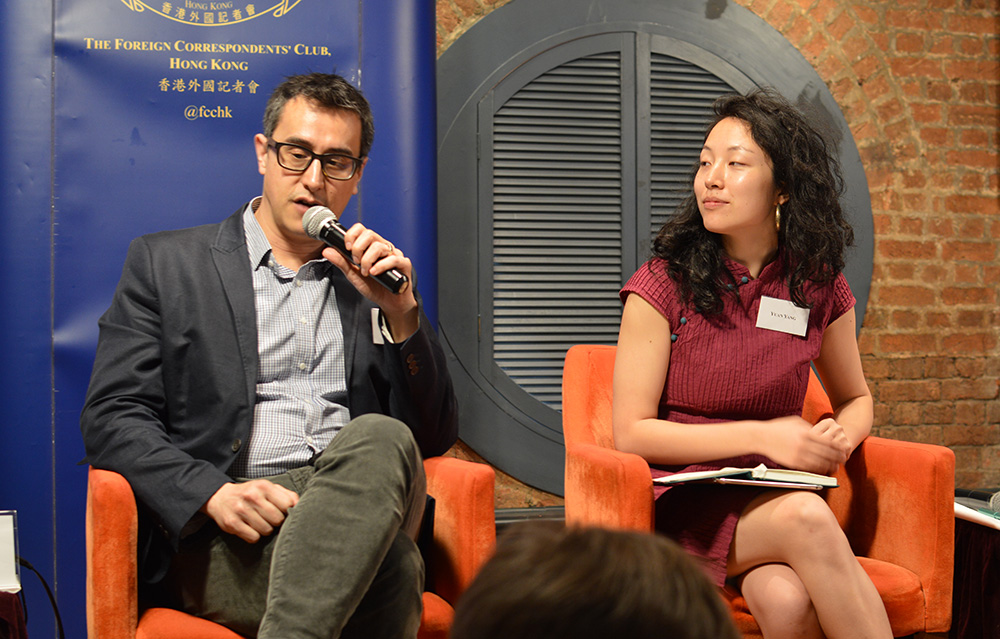 Cedric Alviani, East Asia Bureau Director for the press freedom watchdog Reporters Without Borders, detailed the way in which China is suppressing information ahead of the release of a 52-page report next Monday.

“Journalism as we know it does not have its place in China and actually currently the Chinese authorities are also trying, little by little, to suppress free journalism outside China when of course it relates to Chinese news,” Alviani told the March 20 club lunch.

He added: “If we had met 10 years ago the purpose would have been as an NGO ‘how can we improve the situation in China?’. Now the question is ‘how can we protect democracies from the activities of China in this domain?’”

The Chinese authorities are spending in the region of US$10 billion per year on manipulating and modifying the perception of China in the modern media, he said. An example is China Watch, a pro-Beijing ‘news’ supplement being carried by international media including The New York Times and The Washington Post. China was also buying major stakes in media companies around the world, Alviani said.

His sentiments were echoed by journalists Josh Chin and Yuan Yang, also board members of the Foreign Correspondents Club of China, who pointed to falling revenues of news organisations in the West as a reason for them accepting Chinese investment.

“Even though the New York Times and Washington Post and so on have increased their subscriber base over the last few years, the advertising revenues coming into the media industry as a whole has plummeted because, as we all know, the rise of ad tech giants like Google and Facebook,” Yang said.

The panel also talked about the increased harassment – both in person and online – of reporters in China, specifically those covering the persecution of Muslims in Xinjiang. The Foreign Correspondents Club of China recently published its own report on deteriorating reporting conditions for journalists.

Censorship: How China is tightening its grip on Hong Kong

Hong Kong is feeling the creeping hand of censorship from President Xi Jinping as he exercises a tightening of control over the city and mainland China, said expert Jeffrey Wasserstrom.

The disappearance of the Hong Kong booksellers, the silencing of previously vocal critics of China, and the flooding of pro-China posters around the city during the 20th anniversary of the Handover celebrations are all signs of tightening control, said Wasserstrom, Chancellor’s Professor of History at the University of California at Irvine.

During his appearance at the club on November 3, Wasserstrom detailed censorship in China through the decades, outlining how traditionally Communist Party leaders had swung between a tightening and loosening of control over the information people shared and received. He told how in the era of Deng Xiaoping, Chinese citizens were not free enough to publicly criticise him, but they were not forced to praise him either. He said in the 1990s political jokes were rife, with citizens allowed to be apolitical, with less pressure to express their loyalty.

But the era of Xi Jinping and “his elevation in status” has not only seen a crackdown on freedom of expression and information, but also increased pressure to praise China’s leader or risk being seen as disloyal, he said.

And he warned that a general concept that, until now, applied a different set of rules to Hong Kong was coming to an end. Wasserstrom described how, rather than One Country, Two systems – the framework around which Hong Kong will be reintegrated with the mainland – there had been One Country, Three Systems. He explained this as one set of rules applied in Tibet and Xinjiang; a second set of rules applying to the mainland; and a third set of rules that allowed Hong Kong media to freely report on issues including the pro-democracy movement. But the case of the missing booksellers, along with a push for a China-approved national curriculum, was a sign that this third rule no longer applied to Hong Kong.

The event, titled Xi’s Dreams, Orwell’s Nightmares: Censorship in Today’s China, compared the dystopian visions of writers George Orwell and Aldous Huxley to make the point that China’s censorship campaign is two-pronged: it blocks information coming in but at the same time bombards its citizens with the propaganda it wants them to see – “a culture of distraction and entertainment”. While Huxley’s Brave New World was seen as a critique of capitalism an imperialism, Orwell’s 1984 had much darker undertones.

Wasserstrom also touched upon a recent article by journalist Louisa Lim, who commented on new research on the effects on China’s censorship on its young people which revealed that many of those who were given unlimited access to the internet failed to use it. The report quotes American writer Neil Postman: “What Orwell feared were those who would ban books. What Huxley feared was that there would be no reason to ban a book, for there would be no one who would want to read one.”

He noted the increase in China-centric posters around Hong Kong suggested efforts to spread propaganda had become more obvious, and said future signs to look out for would be banks in the city using the Belt and Road Initiative to promote themselves