Book your place here for the 3rd FCC Journalism Conference. 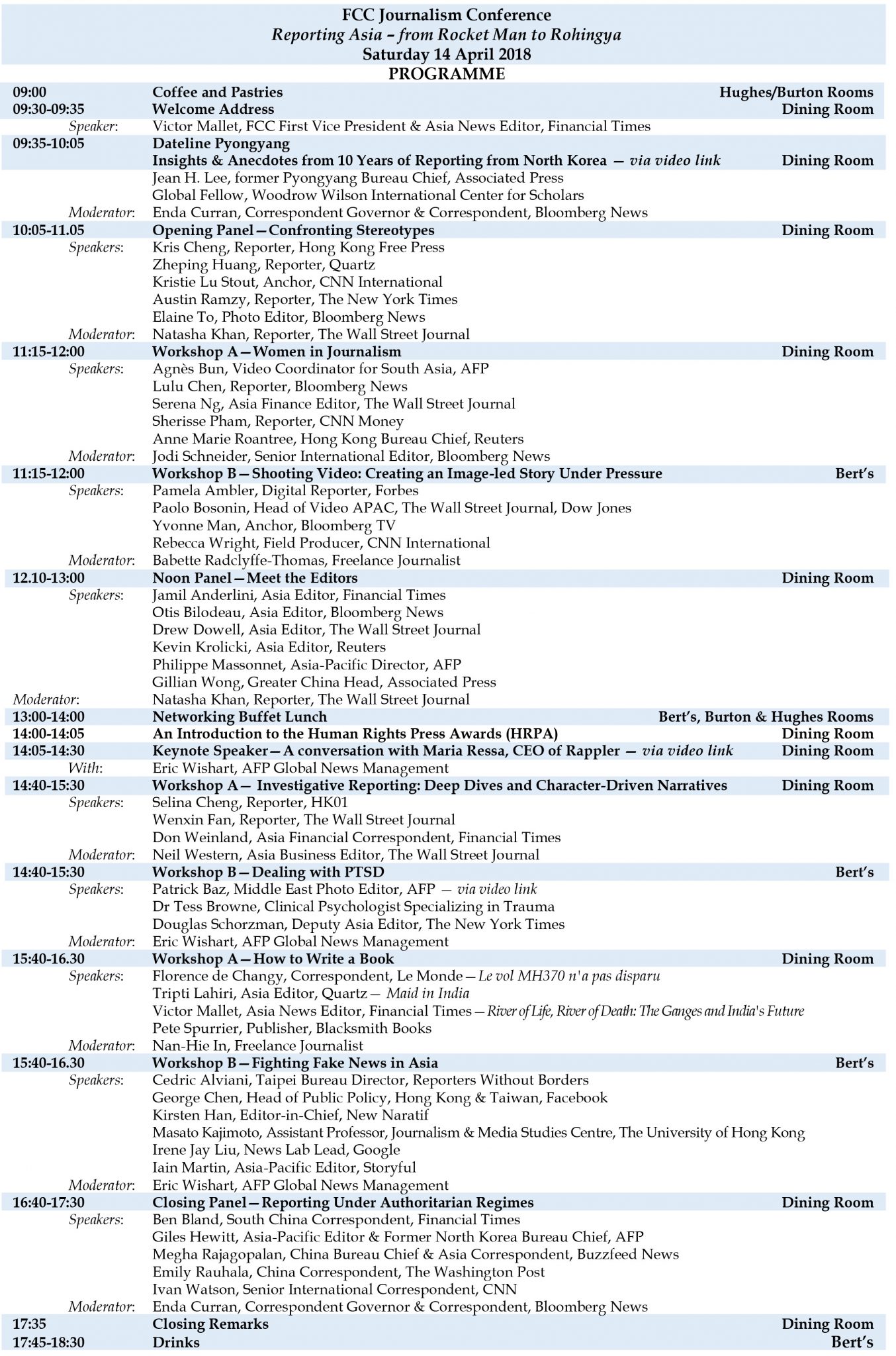 FCC President Eric Wishart talked about the challenges of fake news and how mainstream and social media could combat its spread when he spoke to the Macau Journalists’ Association on May 12.

Interviewed by local television stations after the event, Wishart endorsed the idea of news organisations and social media giants partnering to try to stem the spread of fakes news through a joint verification process.

He told TDM News: “Fake news always existed… It’s news that is fabricated to be presented as real to deceive people often with malevolent intent. The president of the United States, saying the New York Times is fake news, he can say what he likes but it’s not fake news. Fake news is not a story that a politician doesn’t like. It’s also not a mistake that a journalist makes.

“We are moving into this world of kind of a parallel universe where one part of the population is properly informed. You can debunk and prove it as false as much as you like. They don’t want to hear that. They will believe Donald Trump, they will believe New York Times as fake news.”

Wishart, who in April chaired a lively opening discussion on the same topic at the FCC’s second Journalism Conference, emphasised that fact checking was more important than ever and suggested social media and news organisations could fight the spread of fake news together.

Wishart added: “With all these multiple sources of information, journalists no longer control the agenda. I think the way ahead is on one hand, the internet giants – the Facebooks, the Twitters, the Googles – fighting it without resorting to censorship, which is… we’re entering a very grey area there… and just as the media has partnered for journalists’ safety I think they have to partner now when it comes to verification.”

Some of the region’s most talented journalists shared tips and views on reporting in an era censorship, fake news and tweeting presidents during the FCC’s second journalism conference.

The day-long event saw panels and workshops tackling the everyday struggles of reporting from Hong Kong and China. Special guest Evan Osnos, staff writer at the New Yorker, joined via Skype to talk about the difficulties now faced by U.S. reporters writing about the Trump administration.

“I don’t think there’s a more exciting time to be a journalist,” said FCC president Eric Wishart as he closed the conference on April 29.

Earlier in the day guests heard from top editors and reporters on the challenges of reporting the facts at a time when fake news was so prolific it could sway an election result.

Workshops focused on writing to length under pressure and how graphics are being increasingly used to effectively tell stories to an audience bombarded with facts from different multiple sources.

In the workshop for freelancers, tips were shared by a panel including FCC board member Kate Whitehead, Zach Coleman of Nikkei Asian Review, Mark Jones of Cedar Hong Kong, and freelancer Vaudine England.

“As a freelancer you should have a website and pay attention to your LinkedIn account,” said Whitehead, who added that she often uses the social network to find potential story leads.

England advised freelancers to “go to places where there aren’t staff correspondents. Laos, Vietnam… are places that aren’t covered.”

Coleman’s advice was to build relationships, and build a reputation for yourself as a freelancer.

Telling the Hong Kong story to the world was the subject of a later workshop featuring foreign correspondents from the Guardian, Reuters, Financial Times and Bloomberg. Anne Marie Roantree, Hong Kong Bureau Chief at Reuters, said that during Occupy Central in 2014, her team used spot news to tell a wider story about the protests, bringing those stories together for special report on Beijing tracking down activists.

Benjamin Haas of the Guardian said Hong Kong had appeal globally because “there’s a lot drama in Hong Kong that you don’t get in stories on mainland China”. Panel members agreed that covering investigative stories on corrupt business practices in Hong Kong was expensive and time consuming, with time being a luxury most reporters don’t have.

Similarly, the panel on covering China focused on how difficult it is to work in a country where the government refuses to give out basic information requested by journalists.

FCC president Eric Wishart said after the conference: “At a time when fake news and alternative facts seem to be dominating the discussion,  the conference showed that  journalism is stronger, more diverse and more vibrant than ever.

“And as we approach the 20th anniversary of the Hong Kong handover, the conference also confirmed the FCC’s role as a beacon of press freedom in an increasingly difficult and dangerous environment for journalists.”

News publishing is on the cusp of a new era which will see articles primarily shared through messaging apps, the CEO of South China Morning Post has suggested.

“People are now going to fewer sources. Right now Facebook is a leader in that,” he said. But he added: “The age of the app is moving on. People are going to messenger apps. We’re on the cusp of a new era.”

Liu, a former executive at music streaming service Spotify, also proclaimed the homepage dead, an opinion first floated by the New York Times in its innovation report published in 2014.

He said 90% of people now visit messaging apps every day, adding that it will become the primary “discovery and consumption” platform for publishers.

Liu explained that since so many people get their news from social media – quoting a Reuters report that stated 46% of U.S. adults now consume their news on Facebook – publishers were “no longer a world where our product is the world’s best, most accurate narrative on what’s going on”.

He added: “We should look at this as golden opportunity for news.” Liu said that the digital age had brought storytelling with reach not previously available in human history and encouraged publishers to innovate.

Liu avoided talking in depth about his new role at the 115-year-old SCMP, which was bought by China tech giant Alibaba in late 2015 – a move which prompted fears it would adopt a pro-establishment stance. He said the company was “still trying to figure out what our transformation will look like”.

Journalists need to fact check more than ever to stamp out fake news, conference told

Journalists must “double down” on their jobs now more than ever to fight the tidal wave of fake news, the FCC Journalism Conference was told.

Verify your information, quote your sources and use data to ensure you become a trusted source was the message from the opening panel.

The cream of the region’s reporters and editors gathered to discuss the challenges facing news organisations with the rise of unverified news, much of which has been blamed as contributing to the recent election of U.S. President Donald Trump.

Introduced by moderator Eric Wishart, FCC President, Gerry Mullany of the New York Times joined Bloomberg’s Jodi Schneider; Simon Gardner of Reuters; and Yumiko Ono of the Wall Street Journal at the opening of the April 29 conference. They discussed how difficult it has become to report political developments under Trump’s administration.

Schneider said journalism was harder now “because the agenda is being set by Trump through tweets” and the way that Whitehouse press briefings were now being controlled. Those tweets can’t be ignored, she added, but it was important now more than ever to use data to verify them. She said research showed “where there’s no name attached to a quote people tend to disbelieve it” and said she hoped that in times of crisis people would go to the trusted sources for their news.

Mullany described attacks on the press by Trump as “very dangerous” but added that “there are so many fake news stories because there’s an audience for it”.

Social media was also highlighted as a vehicle for the spread of fake news. Ono said the Wall Street Journal was doing “a lot of soul-searching” in trying to discover who its audience is and what they want as the organisation tries to combat fake news.

Reuters’ Simon Gardner revealed the head teacher at a Hong Kong school he recently visited said the school was trying to teach pupils about fake news and the importance of verified news sources – he added: “I hope next year we’ll be talking about the death of fake news at this conference.”

The FCC’s second journalism conference kicked off with an interview with the New Yorker’s Evan Osnos, who has been covering Trump’s administration for the magazine. He talked about America’s white nationalist media and how it subjected him to antisemitic attacks.

He said he believed that before the Trump administration is out it will “make a serious effort to try to stifle the press”, but added that “there is an accountability… I think Donald Trump is in a much more precarious position…” than the administration thinks in a legal sense. 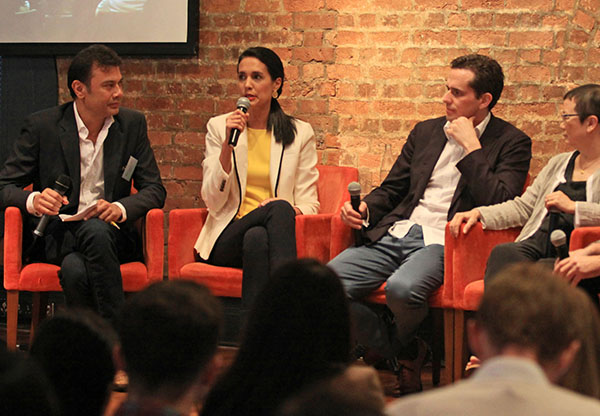 The FCC’s first Journalism Conference featured panelists of senior editors and reporters from around the region. Photo: Asiapix

The Foreign Correspondents’ Club Hong Kong’s journalism conference is back by popular demand!

To be held on Saturday, April 29, the day will feature practical workshops and discussions by panels of experts relevant to journalists at all stages of their careers: topics will range from fake news to virtual reality, drone videos, making the best of social media, how to pitch stories and how to sell the Hong Kong story to an international audience and reporting in China, plus many more.

REGISTER FOR THE CONFERENCE HERE: https://www.surveymonkey.com/r/QR68LM3