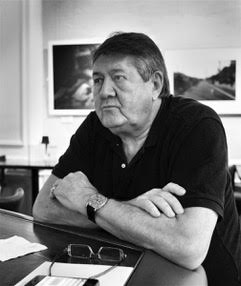 Kevin Egan, a life member of the FCC and a long-standing board member. Photo: ©2018 Robin Moyer

Fellow members, friends and colleagues paid tribute to Egan as a tenacious criminal advocate with a big heart whose legal skirmishes kept local newspapers in business over the years.

FCC President Florence de Changy led tributes to Egan, saying: “Kevin was one of these larger than life characters who would enter the Main Bar as he probably entered the Court room, with both panache and focus, always ready for a good argument and/or a nice drink.

“Kevin joined the Club in 1980 and served on the Board of Governors for 21 years on and off since 1993. Board Governors were all looking forward to working with him as second V-P and Secretary of the Club. The FCC will miss him very much and will remember him fondly.”

Born in Australia, the head of Baskerville Chambers joined the Bar in Queensland in 1972. He arrived in Hong Kong more than 35 years ago after serving as Director of Public Prosecutions in Papua New Guinea where he prosecuted justice minister Nahau Rooney for contempt.

Egan worked as a prosecutor in Hong Kong’s then Legal Department, serving as deputy principal Crown Counsel before being admitted to the Hong Kong Bar in 1990. He found himself in the dock shortly after, battling ICAC charges that he furnished corrupt ex-prosecutor Warwick Reid with a gun and aided his bolt from Hong Kong.

He emerged victorious, but again crossed swords with anti-corruption enforcers in 2006 when he was jailed for perverting the course of justice. In 2009, Hong Kong’s highest court quashed the conviction but only after he had served jail time. During his stint in Stanley Prison, Egan described being ‘put to work’ by inmates, drafting appeals with the aid of a photographic memory of Hong Kong ordinances.

Personal victories aside, Egan championed both glitterati and impecunious alike, adjusting his fees accordingly. After a hard day at the Bar he would take up residence at his second home, establishing himself as a life member of the FCC and a long-standing board member.

A canny raconteur, fellow board members remember him fondly for his pragmatic approach to Club politics. “He was one of my favorite board members,” says former FCC president Tom Mitchell, Beijing bureau chief for the Financial Times.

“I always trusted his gruff, no-nonsense legal advice, which was extremely valuable to the club. I also found him a great ally in my never-ending struggle to contain the board meetings to my usual 90-minute target. Like me, Kevin had no patience for the odd member of the board who greatly enjoyed the sound of his or her own voice and was happy to spend 2+ hours of their Saturday morning locked up in a board meeting.”

I have never met a Counsel so generous of heart. He would structure his fees depending on the client. He would say to me his father would say ‘one day it’s a lamb shank the next day a bone’. He would always take up a cause for an underdog.

Former President Tara Joseph commented: “Kevin will be sorely missed. I will always glance over at the back right hand corner of the Main Bar and look for him as he had such a steady presence there, surrounded by fellow barristers or watching the sports on TV.

“In the years I served on the board I took a special delight in seeing what T-shirt Kevin would rock up in to Saturday board meetings. On weekdays Kevin was usually in a characteristic conservative suit. On Saturdays she showed up in T-shirts advertising heavy metal rock bands. I think it cheered him up on a Saturday morning. Kevin loved the FCC. It was clearly a second home.”

Never shied away from anything or anyone… such an amazing soul who shared so much #MissYou Kevin Egan❤ @fcchk https://t.co/I56dkamQZu

Those who worked with Egan recall his Robin Hood approach to briefs. “I have never met a Counsel so generous of heart. He would structure his fees depending on the client. He would say to me his father would say ‘one day it’s a lamb shank the next day a bone’. He would always take up a cause for an underdog,” says solicitor Kevin Steel.

“His success rate at court was second to none when the bullets were fed to him by a well-prepared team. There are literally thousands of clients who have their liberty because of Kevin’s dedication to his craft and his hard-working ethic.

“To me he was as Senior as any counsel could be without the letters SC. Fearless in defending his clients, a challenge to a solicitor who would sometimes have to rein in the sheer exuberance.

He will be sorely missed by all of the legal community but his legacy is in the HK law reports. Just type in Kevin Egan and it’s plain to see.”

Egan’s former pupils remember him as a breath of fresh air in a rigid profession. Pupils who turned up on their first day in traditional barrister attire were instantly chastised for non-adherence to his dress code of obligatory jeans and T-shirt.

The barrister had a strict ‘KISS’ principle, his succinct style putting even the most nervous client at ease. “He was welcoming and helpful to his pupils and junior members of the Bar,” says former pupil Shaphan Marwah. “Kevin took pride in being a fearless advocate. He was feared and respected.”

Egan was horse racing enthusiast and keen shooter. When once asked by an Australian newspaper what kept him in Hong Kong, he replied: “The lifestyle, the money and to be honest, the tax regime.”

Former SCMP court reporter Charlotte Parsons noted: “No-one can ever accuse him of having a dull life. It is hard to imagine the FCC without him.”

A more in-depth tribute to Kevin Egan will appear in the October-December edition of The Correspondent. In the meantime, please send us your memories and anecdotes of Kevin – [email protected]

Kevin was a force to be reckoned with and the mere mention of his name would bring fear to his opponents in court. Some years ago I asked Kevin if he could represent me in a civil action against a Malaysian company. He agreed saying : “I don’t normally do civil cases, but I’m a bloody good litigator.” I instructed my solicitors to proceed with Kevin at the helm, but did not like my choice of a criminal lawyer. They notified the defence accordingly and they gave up immediately when hearing that Kevin was to be my representative. Such was the power of his name. Vale Kevin.

Kev did not normally take breakfast at the Club before going to court but he did on Monday, 12 June 2006. While he didn’t expect a guilty verdict from Judge Fung he told me he was prepared to have to play the long game. It turned out to be a little longer than expected – Kev had expected it would take 4 weeks for his bail and when I saw him in Stanley 6 weeks later he said it was all getting a little tedious. Whatever fears might have been running through his mind at that point, he was nothing but courageous and an example to us all of calm, fortitude and realism. He was no different when I saw him with Bonnie returning on the bus to Happy Valley from a visit to the Queen Mary Hospital only weeks before he died and I have no doubt he is resting in peace. God bless you, Kev.