He killed more of his citizens in 18 months than died in the Northern Ireland conflict over 30 years – yet Filipinos continue to support rough-talking President Rodrigo Duterte, largely because they believe he is building a better Philippines. 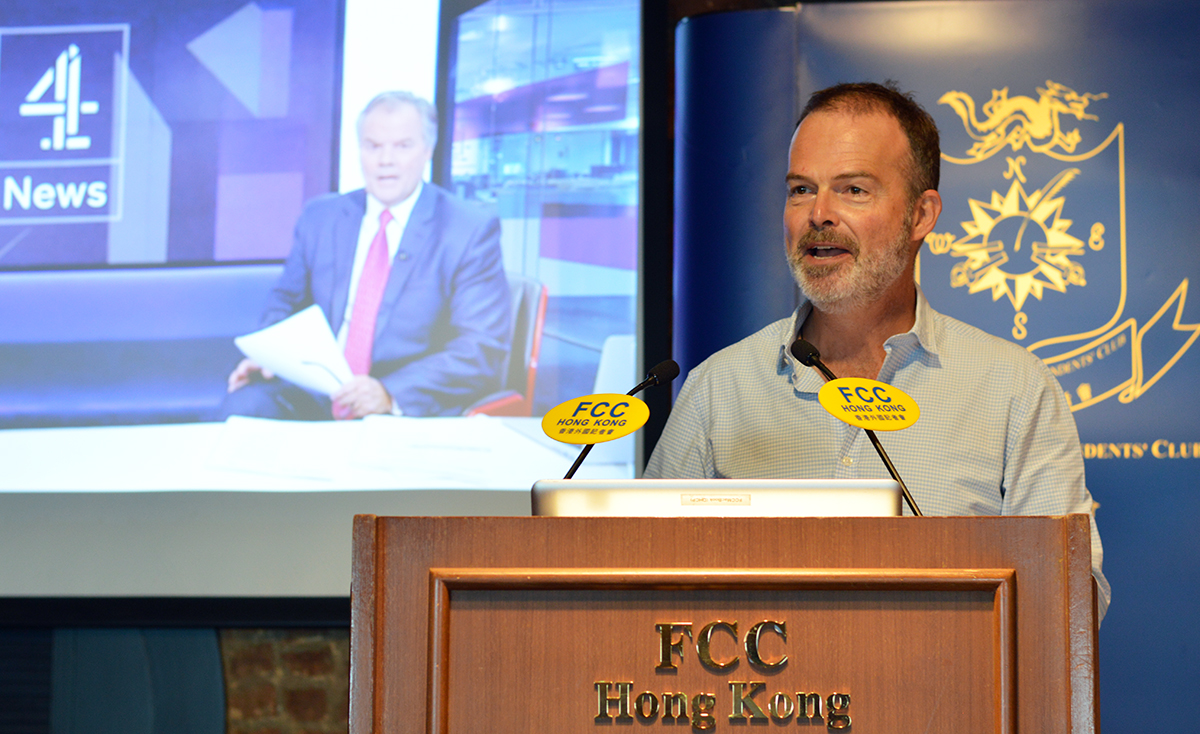 Elected in a landslide victory in 2016, no-nonsense Duterte came from nowhere to sweep to victory, ousting the more liberal President Benigno Aquino III having led a presidential campaign based on stoking the fears of his people. Sound familiar?

“He (Duterte) is what Trump would be if there were no constraints on him at all,” said Channel 4 News Asia Correspondent, Jonathan Miller, at a November 5 club lunch where he talked about his latest book, a deeply researched biography of Rodrigo Duterte.

A man who uses disgusting language and has made numerous inappropriate comments about rape, Miller said Duterte’s worst crime is to normalise killing. Yet he remains popular among his people: “He does make Filipinos proud of their nation after years of this feckless, liberal leadership,” he added.

Miller, who holds the dubious honour of Duterte calling him a “son of a whore” – the same insult he threw at former US President Barack Obama, said Duterte encapsulates the very worst that an authoritarian populist leader can deliver.

Known as Duterte Harry during his reign as Mayor of Davao City after the Clint Eastwood character, he created death squads targeting drug dealers and other criminals that he said had “cleaned up the city “- a claim he continued to peddle as he made his bid for the presidency. However, the truth is that Davao City has the highest murder and rape rates in the country, according to the Philippine National Police (PNP).

This was the type of lie, said Miller, that convinced the majority of Filipinos to elect Duterte. Despite promising to protect the country’s poorest, it is those very people that are dying in his murderous war on drugs, Miller said. Although numbers are difficult to confirm, independent estimates put the number killed by the police at 20,000.

Another campaign promise to “reach the hands of my opponents” to bring an end to animosity resulted in his political opponent and fiercest critic, Leila de Lima, being arrested and jailed on trumped up drug charges. She has been designated a ‘prisoner of conscience’ by international human rights groups.

Duterte has also aligned himself with despots at home and abroad, declaring Russian president Vladimir Putin as his hero, and rehabilitating the Marcos family by allowing the reburial of ousted former dictator Ferdinand, and apparently paving the way for his only son, Ferdinand Jr., to become vice-president.

A 1998 psychiatric report on Duterte, compiled by a former president of the International Council of Psychologists at the request of his estranged wife while she petitioned for an annulment, concluded that Duterte was suffering from Antisocial Narcissistic Personality Disorder characterised by “gross indifference, insensitivity and self-centredness… a grandiose sense of self-entitlement… and a pervasive tendency to demean, humiliate others and violate their rights and feelings”, Miller said.

He went on to quote the report findings as detailed in his book, Duterte Harry: Fire and Fury in the Philippines: “For all his wrongdoings, he tends to rationalise and feel justified. Hence, he seldom feels a sense of guilt or remorse.”