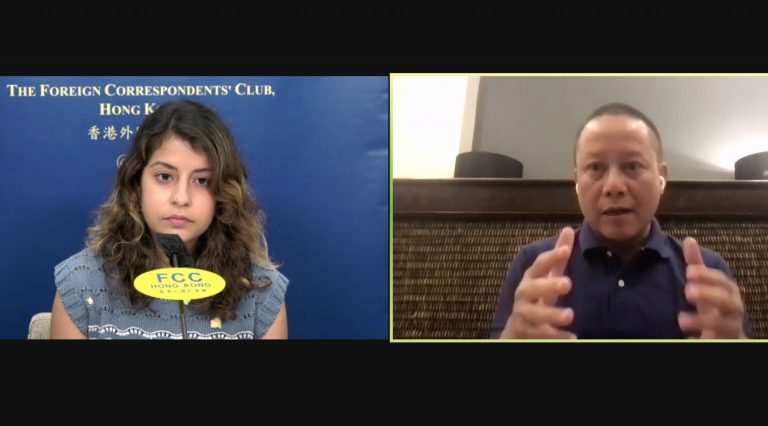 Protests taking place across Myanmar in the aftermath of the February 1 military coup are unlike any prior demonstrations because of the unity between different generations and the use of technology, said Sonny Swe, co-founder and publisher of Frontier Myanmar, in a Zoom webinar hosted by the FCC.

“It’s a lot more organised, it’s a lot more tech-savvy and there are three generations working together,” Swe said. “This is a different resistance now.”

The COVID-19 pandemic had forced people in Myanmar to unify and help each other, a trend which has carried over to the country’s Civil Disobedience Movement, which aims to cripple the military through strikes that will weaken the economy.

“That’s why you see citizens helping each other and helping each other. It comes from the COVID [response],” Swe told FCC Correspondent Governor Shibani Mahtani during the discussion. “This is the positive sign of this country.”

Swe said the junta has been caught off guard by the overwhelming backlash to the coup, and that the military’s way of thinking hasn’t changed in decades. Investor confidence has plummeted in a way it didn’t in past times of social unrest, he said.

“A lot of people don’t trust in the military regime,” he said. “The strategies they’re using aren’t working obviously.”

Asked to comment on the controversy surrounding CNN correspondent Clarissa Ward’s recent reporting trip to Myanmar, Swe said that it had been misleading to label the story an exclusive – “the only exclusive was getting the permission” to enter the country.

He understood why a news outlet would accept such a trip, but “CNN should have done the proper homework before she flew into Myanmar”.

“We have the other international news outlets here and also we have local journalists who are risking their lives every day on the street reporting everything”.

As for Myanmar-based media organisations, he said that they were facing an increasingly difficult situation.

“We are trying our best to stay alive at this point,” Swe said.

Frontier had launched a membership programme before the pandemic and it was picking up, but safety was a major concern.

He described a situation of increasing danger for the journalists he employs, and the steps he’s taken to try to keep everyone safe and minimise harm, including only assigning people to cover their townships so they don’t have to travel.

Still, the situation grows increasingly dangerous for journalists, and Swe shared the story of one of his journalists in Mandalay who’d been shot in the hand and will likely never regain full function in it, despite having undergone three surgeries already.

“If something like this happens, it ruins someone else’s life,” Swe said. “The only thing I can do is to keep fingers crossed and tell them to be safe, and I don’t know how long we will hold on to this.”