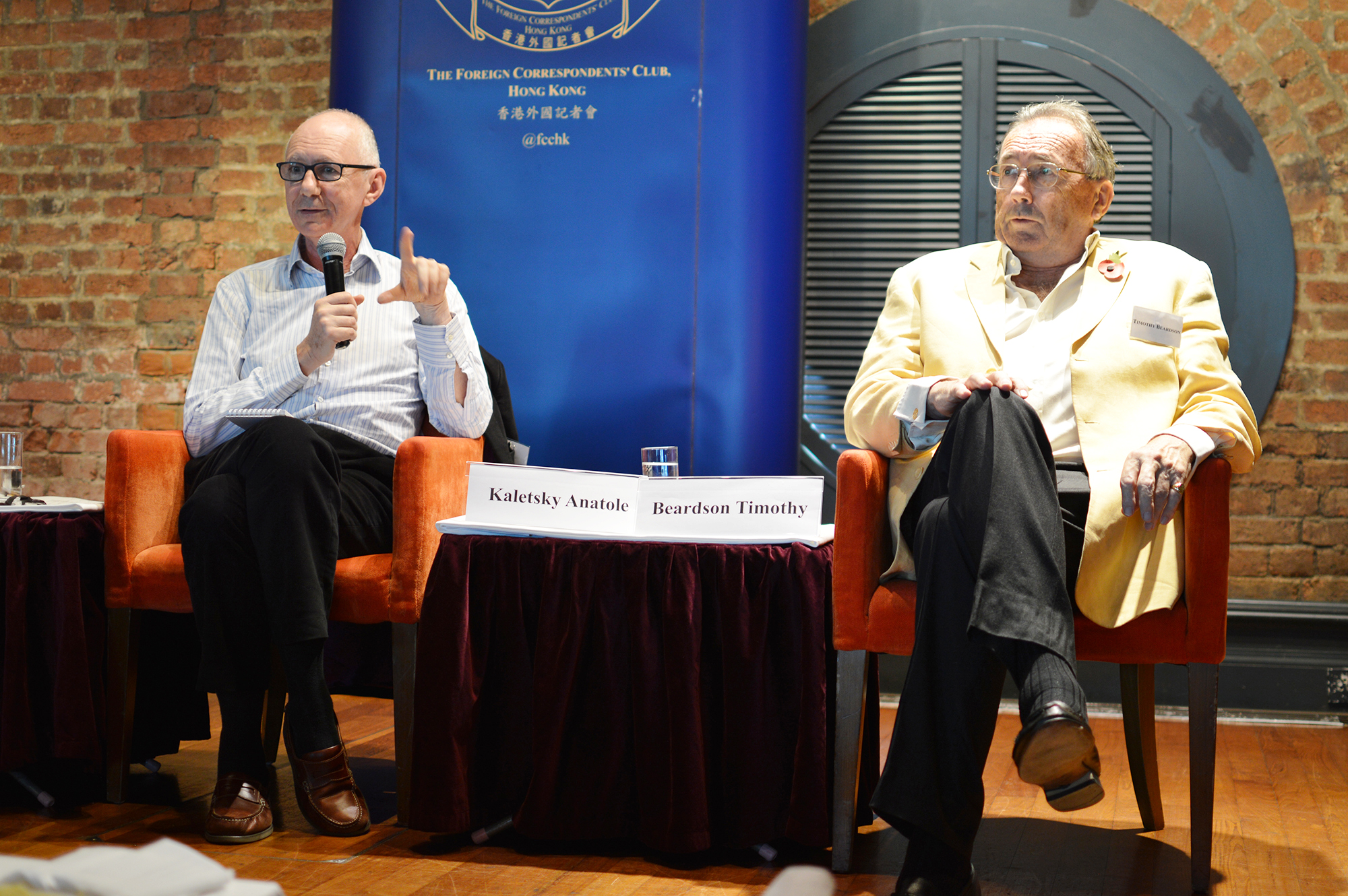 Will Brexit be a triumph or train wreck for Britain? Two panelists went head to head to lay their cases over the divisive issue.

Left to right: Experts Anatole Kaletsky and Timothy Beardson debate the pros and cons of Brexit at the FCC. Photo: Sarah Graham/FCC

The question over the United Kingdom’s decision to leave the European Union was the subject of a debate at the November 8 club lunch, which kicked off after a show of hands in the room revealed there were more Remainers than Leavers.

Anatole Katelsky, co-chairman and chief economist of Gavekal Dragonomics, the consulting and asset management company based in Hong Kong and Beijing, argued that Brexit would be an economic disaster for Britain; while Timothy Beardson, chairman of Bixmoor, suggested that the country could thrive once it left the EU.

Beardson, first to take the stage during the debate, argued that the EU was shrinking, and with it economic opportunities: “In 1950, 16% of the world lived in countries that now comprise the European Union. Now it’s 6% of the world. By the end of this century it’s going to be 3% in the world. That’s a narrow sample for Britain to make as its economic home.”

He added that Britain had three choices when it comes to trade post-Brexit: that the country trades on World Trade Organisation rules which means accepting tariffs – “that doesn’t seem to stop trade going on”; or we can be part of a series of trade blocks; “or we could say we’re going to have no tariffs. That would be aligning our trade policy with the consumers, not the producers – an interesting idea that might go down well with the voters”.

Beardson added: “The European Union is very committed to protectionist measures. It abhors the primacy of U.S. and British financiers in global finance. It would like to tilt the playing field to prevent that.”

And Brexit was “ultimately not an economic question, it’s a political question, it’s a cultural question. Does Britain want to be part of an ever closer political union with Europe? And the answer is most people don’t want that. European advocates like to say it’s all about economics but it’s not. Economists can have all sorts of different opinions about Britain’s move from Europe to a wider world, however, ultimately it’s a political decision. Economic issues don’t matter very much.”

Katelsky began his pitch by agreeing with the point made by Beardson: that Brexit was not just an economic issue, it was a cultural and political issue too. “Politically, I think Brexit is a very dangerous phenomenon because it was a protest vote – perhaps a justifiable protest vote – but about all kinds of issues, many of which had no direct connection with world trade, protectionism, the relationship to Europe or to the rest of the world,” Katelsky said. “They had to do with the health service, education, with housing, with regional policy – none of which have any connection with European policy.”

He added “the great danger and near certainty of Brexit” was that it would not deliver any solutions to the disquiets felt by the British population, and that subsequently “at the end of the process even if it does go well it will leave more anger and more dissatisfaction than less”.

And the country would ultimately not “take back control” – one of the slogans used by the Leave campaign – because reduced tariffs would lead to more competition and less regulation, he said.

Socially and culturally, Katelsky said Britain, “which has been throughout my lifetime, the most successful multicultural society in the world” was now somewhere many who, like himself had not been born there, now felt unwelcome. Katelsky said that as a result he had applied for a Polish passport. He said this sentiment was felt across the country and was partly fuelled by Theresa May’s citizens of nowhere speech where the British Prime Minister said: “…if you believe you’re a citizen of the world, you’re a citizen of nowhere”.

Economically, he said that since 1992 Britain has had the best performing economy – of the G7 economies – in the world in terms of GDP. He said this was due to two factors: the completion of the single market program; and Black Wednesday, when Britain decided to detach its monetary policy from that of Europe – meaning it got the full benefit of trading in the single market in Europe, causing “enormous growth in the service industries”.

So for the last 25 years, Britain has been able to have its cake and eat it, Katelsky added.

The only two realistic options now would be for Britain to reverse the decision of the 2016 referendum result, which was unlikely; or that it would remain in a “permanent limbo” during the so-called transition phase where it would still enjoy the benefits of single market access but would also still be subject to free movement of people, he said.