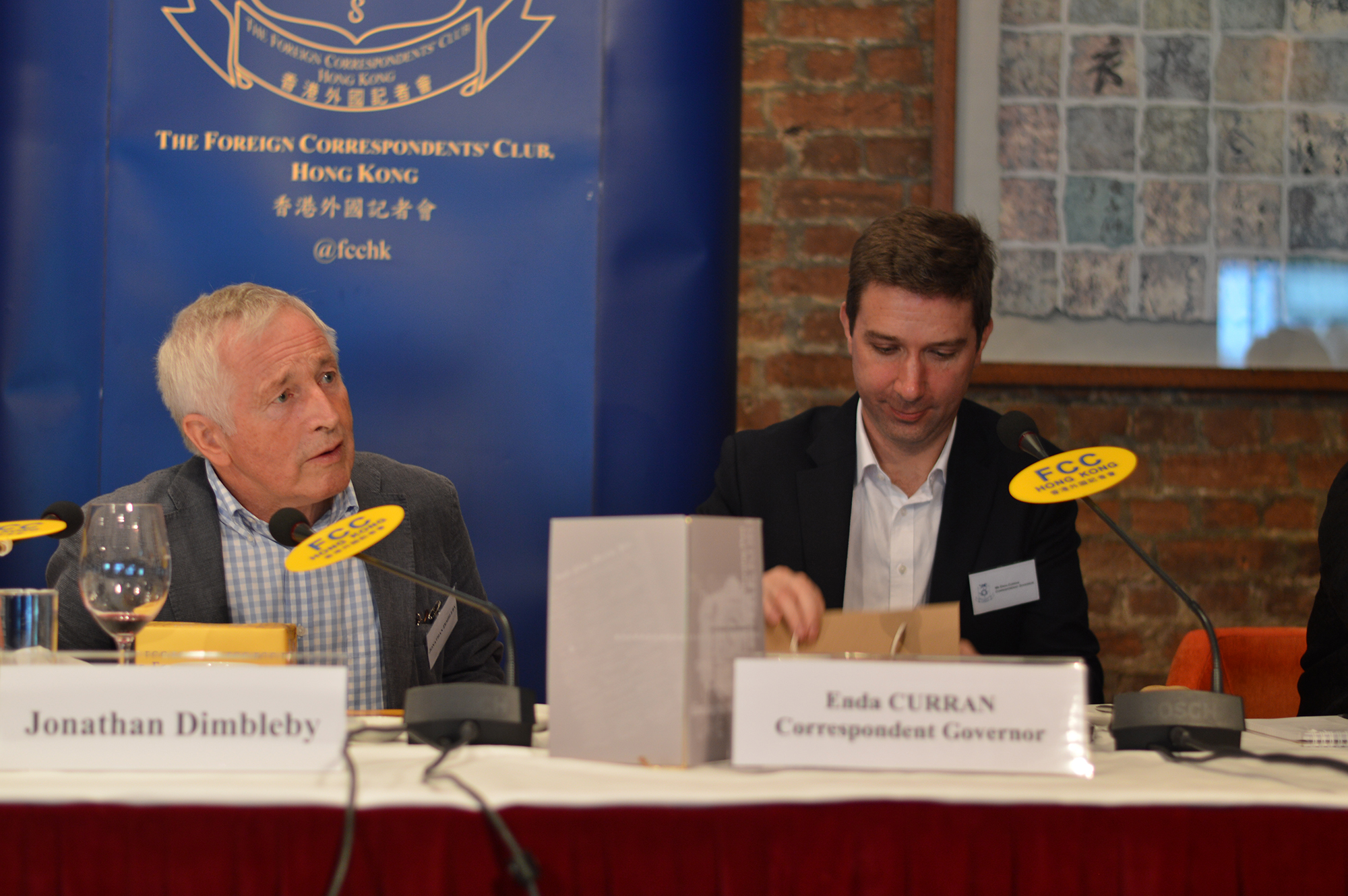 BBC presenter and historian, Jonathan Dimbleby, left, talked about the state of world politics when he appeared at the FCC. Photo: Sarah Graham/FCC

The British government should be “very robust” over whether it believes the Sino-British Joint Declaration on Hong Kong’s handover has been violated, veteran broadcaster Jonathan Dimbleby said, the week after China’s foreign ministry dismissed the treaty as a “historical document that no longer has any realistic meaning”.

The BBC Question Time host and historian said that while the U.K. government had last week reiterated that the 1984 treaty was binding, the overall criticism had been “muted”.

He said that if it was agreed that a violation had taken place, then it would “call into question whether you could trust China’s word when it came to signing documents”.

“I think that the British government should be very robust in saying whether or not this agreement has or has not… been violated,” he said

He added that he believed that independent trading relations, post-Brexit, could “overshadow concern for the evolution of democracy here [in Hong Kong]”.

Dimbleby revealed that as a journalist in the 1990s he came across minutes of meetings conducted in the late 1980s between the British government and Beijing that showed the U.K. government of the time had little intention to push for democracy in Hong Kong after the handover. In public, he said, the Conservative government was assuring Hongkongers that they would achieve democracy as part of the agreement.

“In the way that one does as a writer or journalist… I came across minutes of meetings conducted in late 80s between the British government and the Beijing government. In public, if you look back… the British government were saying to the people of Hong Kong yes, you will have democracy and we want you to have more of it, we will fight for that.

“Simultaneously the British government was reassuring Beijing they had no intention of rocking the prevailing apple cart and central government need have no fear that democracy would be taken forward in the way that a lot of people, as the polls showed here, wanted it to be.

“I came away from that experience and wrote about it without great faith in how my government would deal with Beijing,” Dimbleby told the packed July 5 club lunch.

The night before, Dimbleby had taken part in a BBC World Questions debate alongside Joshua Wong, one of the student leaders of Occupy Central and the founder of the pro-democracy Demosisto party. He praised the 20-year-old, saying: “Joshua Wong is a remarkable illustration of the intelligent young of this generation.”

In a change to the usual club lunch formula, the floor was opened up to questions from the outset. Dimbleby was asked what he thought of Brexit, the U.K. General Election outcome, and Donald Trump as president.

He said: “I woke up like many people after my country voted for Brexit in a state of shock and astonishment. Those who supported Brexit were equally astonished because they never expected to win.”

On the U.S. question, he continued: “Like many people I believed that Donald Trump would never emerge as President of the United States. I thought it would be catastrophic if he did and that most people in the United States would recognise that to be the case.

“Latterly in my own country I did not imagine the Prime Minister, who was a vicar’s daughter, who said there were no circumstances in which she would call a snap election, deciding to do so. The Conservatives are in office, but they’re hardly in power. And the rest of the world is on tenterhooks.

“I think we’re in very uncertain times, I think we are in quite alarming times with the unpredictability of the American President.

“The one thing about the leaders of Russia and China is that they may behave in unpredictable ways but we are quite clear about what their broad intentions are in the West and that is hugely unsettling… for all people in a way that I never imagined.”

Dimbleby added: “If you’re a journalist you have to be glass half full and I’m generally half glass full, but I’ve never felt closer to being glass half empty.”