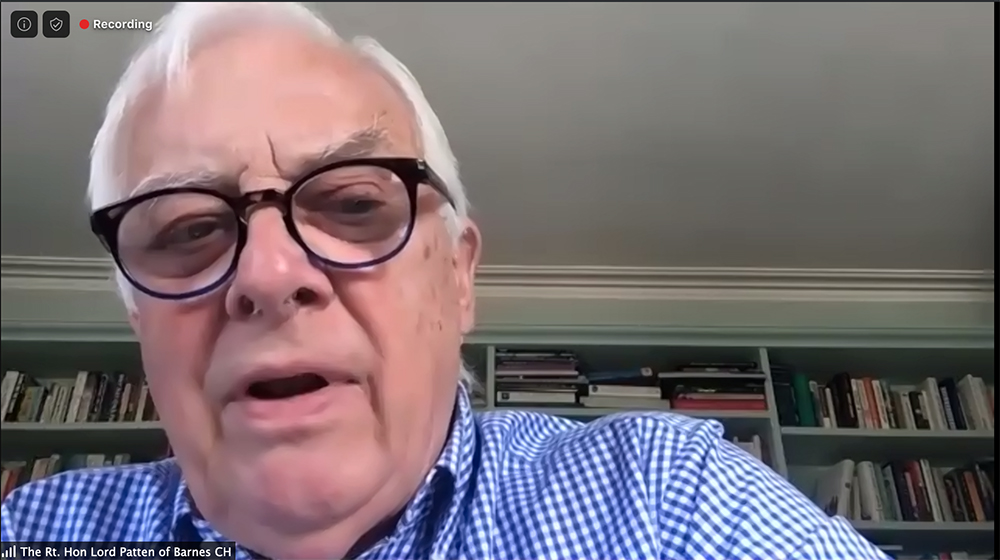 Lord Chris Patten, Hong Kong’s last governor, urged the city’s protesters not to lose heart but to continue their fight with dignity.

Chris Patten, the last governor of Hong Kong, talks during an FCC webinar on May 20, 2020.

The former chairman of Britain’s Conservative Party was speaking during an FCC webinar on the future of Hong Kong where he answered a wide variety of questions from members. On the question of the future of Hong Kong’s protest movement, Patten said:  “They shouldn’t lose heart. They shouldn’t lose their sense of dignity and decency and moderation.”

Patten took the guest seat in the webinar the week after a report from the Independent Police Complaints Council (IPCC) cleared its force of misconduct during last year’s anti-government protests.

Patten said the report “divides the community even more” and described it as “a blow to the hopes we all had to return to normality”.

“And normality is a situation in which people can express their views if they choose to do so and not be run off the streets,” he added

On the recent arrests of leading pro-democracy figures on charges of involvement in unlawful assemblies, Patten described the move as “an attempt to intimidate the rest of Hong Kong”.

On the COVID-19 outbreak, Patten praised Hong Kong and Taiwan for their response to the epidemic, saying that Hong Kong “dealt with it brilliantly”. He added that freedom of the press in the city had given residents the information they needed to act quickly. Patten was critical of the Chinese government for quashing the voices of whistleblower doctors in the early stages of the epidemic, but added that the Chinese people “behaved heroically” in their response to the crisis.

Following the event, Ministry of Foreign Affairs in Hong Kong issued a statement in which it accused Patten of “distorting the one country, two systems principle” and tarnishing China’s international image.

One Country, two systems means what it says. It does mean that Hong Kong has a high degree of autonomy and that’s one reason why people have continued to invest in Hong Kong. It’s one reason why it’s responsible for, I guess, two thirds, maybe more, of mediated direct investment in and out of mainland China. So I don’t think one should spend too much time questioning whether what was done by the joint liaison office and the Hong Kong Macau affairs office was in breach of the joint declaration – of course it was. It’s a breach of the promises to Hong Kong people about local autonomy.

The arrest of 15 well-known democratic leaders for doing what I think in one case 1.7 million people or more had done. Nobody accuses them of violence but they took part in demonstrations which as I say were attended by 1.7 million people. Now I read what the UN Human Rights observer has said about that and I totally agree with it. It’s pretty outrageous  and we all know what it’s an attempt to do. It’s an attempt to intimidate the rest of Hong Kong. The idea that President Xi Jinping should be terrified of Margaret Ng is really pretty incredible.

Even in the last few years when people have disagreed strongly about things, there’s been a general recognition, as I understand it, that the chairmanships and deputy chairmanships of the committee would be shared out across the chamber, and I think it’s a thoroughly bad thing that that has gone.

Back in June last year, I said that one way of ending the demonstrations and bringing calm back to the city would be to establish an independent inquiry transparent under judicial powers to look at what had happened. And I think with much more legal argument behind it, Andrew Lee, the former chief justice, argued for the same without making any political points about it. Now it just happens to be a subject about which I know a bit because after the Good Friday agreement in Northern I Ireland I was tasked to chair the committee which reorganised policing. It was a Labour government that appointed me, I came from the Conservative Party. I had a group of international experts, I had a group from both sides of the Catholic and Protestant communities and we did it transparently and openly and we produced a report which the whole community could accept. We had I think 20…30…40 public meetings with huge crowds at them and it turned into a sort of reconciliation commission. That’s the point of these things. To finish up with an IPCC report which just divides the community even more really is a blow to the hopes we all had of a return to normality in Hong Kong. And normality is a situation in which people can express their views if they choose to do so and not be run off the streets.

I think there’s been a significant change in China – in Beijing – since Xi Jinping became president or dictator for life complete with a personality cult which is extraordinary. Ten to 12 years after 1997 things went pretty well, not perfectly. The promises of giving Hong Kong greater accountability, more opportunities for developing democratic institutions – a promise which was explicitly made before 1997 and afterwards both by Liu Ping, the director then of the Hong Kong Macau affairs office, and by the Foreign Ministry in Beijing – those promises were rowed back on. But by and large Hong Kong was allowed to get on with its own life and people’s determination to have the Rule of Law, to have all the freedoms you associate with Hong Kong’s success. By and large that wasn’t interfered with but just as Xi Jinping came in and dissidents were rounded up, they were tougher on human rights. I think it’s also true that Xi Jinping saw that liberal democracy, as he would define it, as an existential threat to what he wanted to do. There was an instruction to government and party officials sent out in 2013 which said that all these things like teaching history openly, like the Rule of Law, like giving people greater accountability, like developing civil society… all these things are a threat to the Communist Party so we must attack them. And it became public because a very brave woman in her 70s called Gao Yu leaked this, and it’s all there, including the stuff about patriotic education. so I think that the sad point is that in the last few years, Xi Jinping and his court have regarded Hong Kong and Hong Kong’s freedoms as an existential problem for them because Hong Kong represents so much of what they dislike.