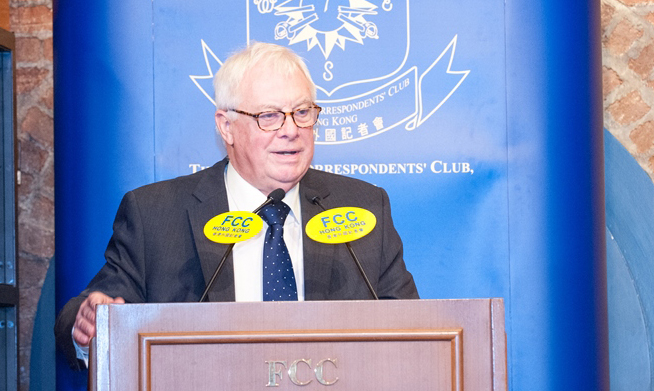 Chris Patten talking at the FCC about Trump, Brexit and Hong Kong democracy

Former Hong Kong Governor Chris Patten today blasted those who ‘make a mockery’ of Hong Kong’s democracy movement and said it would be a tragedy if democracy campaigners lost the moral high ground because of the antics of some of those seeking independence for the city.

Speaking at a sold-out lunch at the city’s Foreign Correspondents’ Club, Lord Patten castigated the young pro-independence lawmakers who refused to swear allegiance to China after being elected to the the Legislative Council, stating “taking an oath is a serious business”.

“I think two years ago many brave young people in Hong Kong established moral high ground about democracy in governance and I think it would be a tragedy if that high ground was lost because of the antics about so-called independence for Hong Kong,” he said.

“Taking an oath is a serious business… Taking oaths isn’t something of a lark.

“Paragraph 3 sub section 1 (of the Joint Declaration) talks about the territorial integrity of China and national unity including the SAR and the rest of the country, so in my view it would be dishonest, dishonourable and reckless of somebody like me to pretend that the case for democracy could be mixed up with an argument about the independence of Hong Kong – something which is not going to happen, something which dilutes support for democracy and something which has led to all sorts of antics which should not take place in a mature society aiming to be a full democracy.”

Lord Patten was at the FCC to talk about the world after Trump and Brexit, but well aware that the huge number of press attending the event would be keen to bring up Hong Kong, he headed off their questions by issuing his very direct statement.

The pair made headlines around the world when, during their oath-taking ceremony, they refused to swear allegiance to China, used bad language and sported banners that read “Hong Kong is Not China”. Their behaviour led Beijing to make an “interpretation” of Hong Kong’s Basic Law – the city’s mini-constitution that was adopted after the handover from Britain to China in 1997 – which saw the newly-elected legislators barred from holding office.

Beijing’s actions, seen by many as interference in the city’s affairs, led thousands to take to the streets in protest, sparking clashes with police.