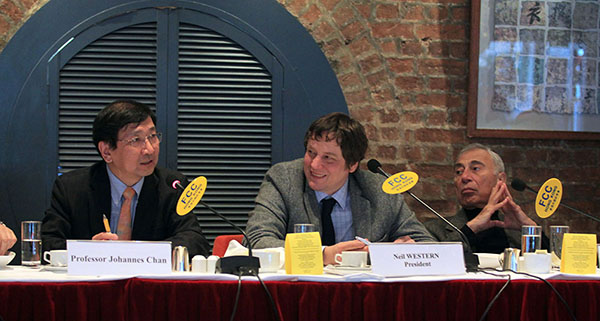 Professor Johannes Chan, speaking at a Human Rights Press Awards fundraising luncheon on December 10, addressed the cloud of controversy that has followed him this year, calling into question the larger issue of academic freedom in Hong Kong.

The uproar started in the months leading up to the University of Hong Kong council’s long-delayed decision in September to reject the former Law School dean’s appointment as vice-chancellor. Tensions had already risen over the summer, as students held protests, distributed petitions and even stormed a meeting over the case.  Chan, a former Human Rights Press Awards winner, is known for his liberal views on democracy.

The move to block a critical voice at the city’s top educational institution came at a time of increased concern about broader freedoms in the city. Leaked recordings, threatened legal actions against students and a gag order against local media have since been linked to the case. (The FCC Press Freedom Committee released a statement in November about the gag: http://www.fcchk.org/node/6096)

“It is painful even to recollect these events,” Chan said to a room packed with FCC members, as well as local TV crews and reporters. “This incident is not about myself. If it were, I would have just withdrawn long ago. But it is about something much more important: it’s about our fundamental rights and freedoms, about what a university means to us.”

A school is not only a place where teachers teach and students memorise, but “a place where knowledge is created, gathered or discovered,” Chan said. “A university is characterised by its scepticism of and readiness to challenge conventional values.”

He contrasted Hong Kong’s academic culture with that of mainland China, where universities are “state institutions”.

“Independence inevitably means that not all views expressed by academics are acceptable to the governing regime,” he said. Because of this, “academic freedom is of particular value, not just to the academics, but to the community as a whole.”

He warned that his own case was only the latest in a series of threats to academic freedom, which he called a constitutionally protected right “to conduct research, teach, speak, and publish, subject to the norms and standards of scholarly inquiry, without interference or penalty.”

Chan described his own case, in which the Chinese state-run media launched a personal campaign against him in the lead-up to the university decision. “An overwhelming and sustained attack, with over 350 articles over a sustained period of nine months… by the pro-China media, including even the People’s Daily, is, to say the least, highly unusual, if not political,” he said.

Chan is seen as being close to Professor Benny Tai, the leader of the Occupy Central movement who is also on the HKU Law School faculty. However, he dismissed criticism that he was somehow personally behind the mass protests last year, as he was not even in Hong Kong. (He was working as a visiting professor at the University of Pennsylvania’s law school).

In a tongue-in-cheek comment, he referred to himself in the third person: “The recommendation was first leaked and criticised in November 2014 by a pro-China newspaper, apparently on the grounds that the candidate had, during his deanship, failed to prevent his colleague from promoting and eventually conducting a massive movement of civil disobedience, resulting in the occupation of the main thoroughfares of the territory for 79 days.”

Chan’s harshest comments came during the Q&A session, when he was asked about Arthur Li, a former education minister who was shown by the leaked recordings to be the pro-government figure who pushed against Chan’s appointment. Li cited Chan’s lack of a doctorate as proof that he was not academically qualified, even though he was the longest-standing dean of Asia’s top law school.

Chan hit back saying that Li himself was unqualified for a job he is tagged for – as head of the HKU council. He said that body had to be “inclusive and bring people together” – and that Li was “not that type of person”. He added that Li and the council did not have the support of the great majority of teachers and students.

Chan said it “does not require a PhD” to figure out that political interference was at play in blocking him from the position.

He also criticised the law that makes Hong Kong’s political leader, Chief Executive CY Leung, the chancellor of all of the city’s publicly funded universities. Leung’s chancellorship would normally be seen as a figurehead role – it’s the vice-chancellor who is in charge of the day-to-day operations on campus.

The December 10 fundraising luncheon marked the official launch of the Human Rights Press Awards’ 20th anniversary edition and the opening of the 2015 contest’s entries period. It was held to coincide with the UN’s Human Rights Day.

Chan joked that he was was now part of the HRPA’s “distinguished victims speakers list”, along with Ching Cheong (a Straits Times journalist who was jailed in China for almost three years) and Kevin Lau (a Ming Pao editor who was attacked by knife-wielding assailants after publishing critical reports on China). Both Ching and Lau were in the audience that day.

Joyce Lau is the director of the Human Rights Press Awards. For more information, go to HumanRightsPressAwards.org. 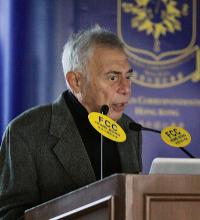 It turns out that world-renowned graphic designers are driven by the same motivations as work-a-day journalists: a tight deadline and a hot meal.

I was flattered when Henry Steiner – a globally recognised branding expert who has worked with HSBC, IBM and other corporate giants – referred to me as an inspiration behind the new look he created pro bono for the Human Rights Press Awards’ 20th anniversary.

“It’s not often that an attractive young woman picks up the bill,” he joked about a working lunch we had in the FCC in August. It was then that I laid down a hard deadline, the way only a news editor can. “The taxi meter was ticking. The flag was down,” Steiner added.

The process of creating a new mark for the HRPA began at this lunch, when Steiner spent most of his time doodling on the FCC’s yellow paper placemat. He drew quickly while we tossed around the images usually associated with protest and censorship: barbed wire, a chain, a fist, a placard, a bullhorn, a loudspeaker, a microphone. Steiner told me not to show his sketches to anyone yet (the clucking chicken idea was probably not going to make it).

At the HRPA’s fundraising luncheon, Steiner used a PowerPoint presentation to take the audience through his months-long creative process. He explained that the curved part of the lock is called the “shackle” – an appropriate term for an organisation that often awards journalistic works about jailed dissidents and speakers.

The small indent on the edge of the shackle is called the “notch.” And when viewed from the side, it looks like a person’s face in profile, with the notch as the nose. “Reporters are nosy,” Steiner said. “They have a nose for news.”

It was apt that a media award had a design that included a play on words.

Steiner drew locks wherever he could – once, ironically, on a large South China Morning Post photo of Xi Jinping against a red wall at a military event.

“I’d rather get an idea down quickly than to put it in a nice book,” Steiner said.

This is how Steiner came up with the “unLock”, a bold new mark set in black and ochre. (For font geeks out there, he chose the appropriately named “Impact”, which has a blocky, headline-type look).

He and his team at Steiner & Co. are painstakingly redesigning the HRPA’s materials, from the look of our website to our entry forms and business cards. They also created great T-shirts, a few of which Steiner signed with elegant silver ink at the December 10 fundraiser.

“For a man with a key, everything looks like a lock,” he said.