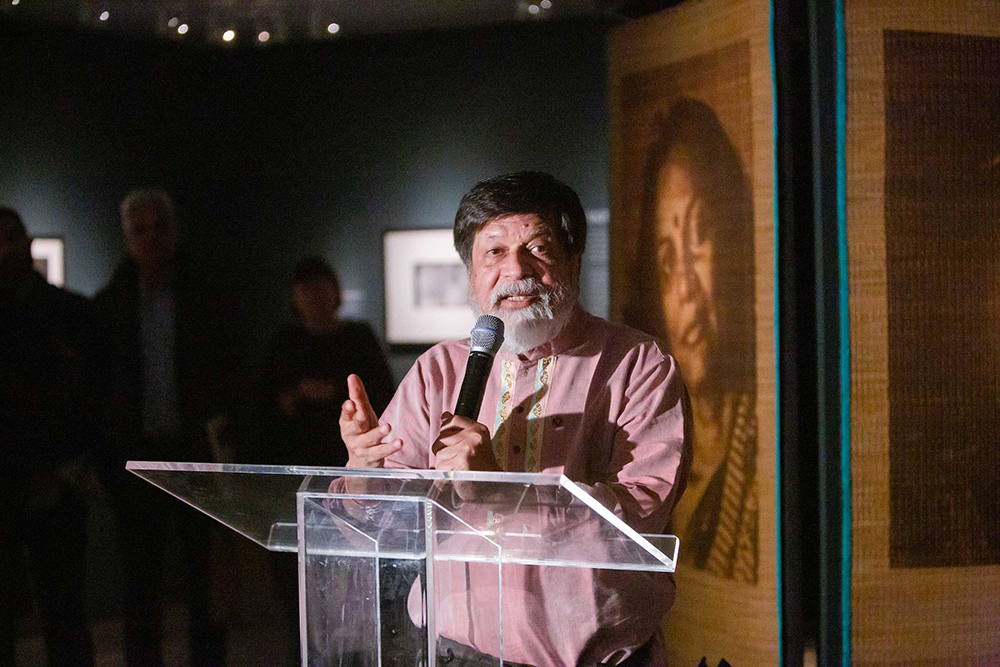 Bangladeshi photojournalist Shahidul Alam on jail, torture, and why he won’t stay silent

Shahidul Alam is a Bangladeshi photojournalist and activist whose criticism of his government landed him in jail in 2018. But that hasn’t silenced him, as Rob Gerhardt discovered when he caught up with him in New York.

Shahidul Alam speaks at the opening of his show, Truth to Power, at the Rubin Museum of Art

Photojournalist Shahidul Alam sits in a lecture hall at the Columbia University School of Journalism in New York, a long, long way from the Bangladeshi prison where he was jailed for 107 days in 2018.

His time in prison and the torture that he endured haven’t slowed the activist down or taken the ever-present smile from his face. But Alam still faces the possibility of a 14-year prison sentence in Bangladesh after an interview with Al-Jazeera in which he criticized the government for its violent response to road safety protests.

He was let out of prison on bail after an international backlash, but the case is still winding its way through the judicial system. The High Court in Bangladesh issued a stay on the police investigation until Alam’s petition to the High Court is concluded. When we met, he was confident the case would be dropped at a court hearing scheduled for December 18.

But the Bangladeshi court did not respond to his case on that date, and made no statement about it. Sofia Karim, his niece, told me afterwards that she thinks this is the government’s attempt to keep the case dragging on – and hanging over him. She felt it also allows the government to keep pressure on Alam without admitting that they don’t have a case against him. So, as we went to press, things remained in a state of limbo, without even a future court date. 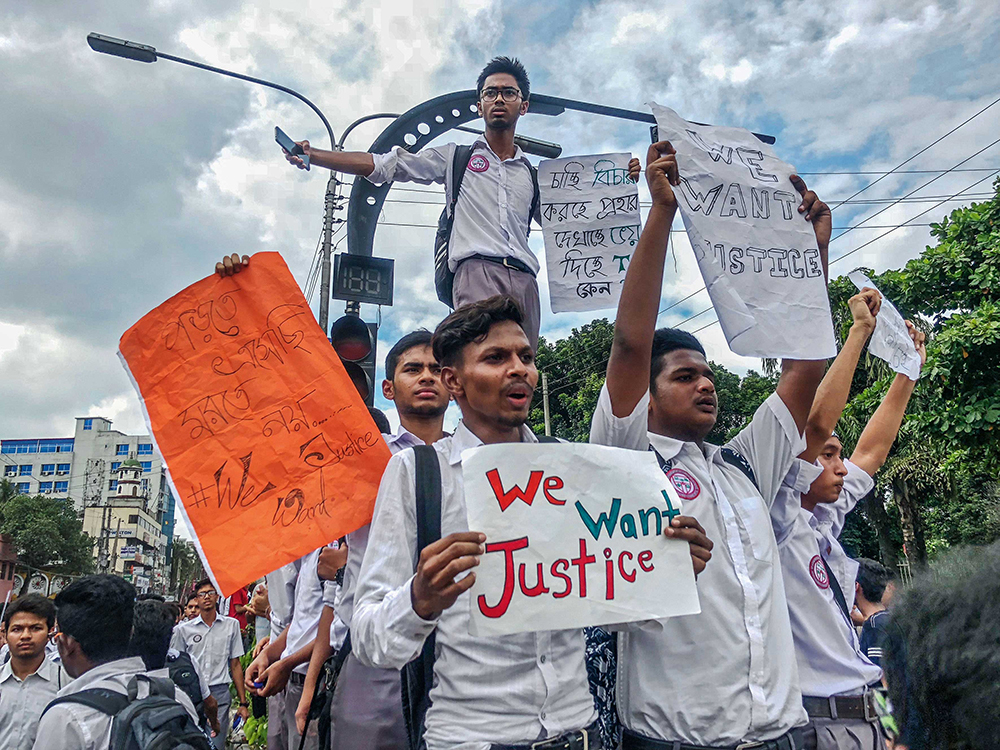 Alam’s visit to New York coincided with the first major exhibition of his work in the U.S., at the Rubin Museum of Art. Titled Truth to Power, it follows the publication of his new book, The Tide Will Turn (published by Steidl).

The book is in four parts; the preface and first section, Keranigani Jail, tell the story of Alam’s arrest, his time in prison, and the work done by those both named and unnamed who worked to get him out. Sections called Art, Politics and Letters follow.

The book reads like a memoir, interspersed with sections of photographs from all stages of his career. The text and photographs are tied together through telling the stories of the people involved, whether they are in the frame or not. 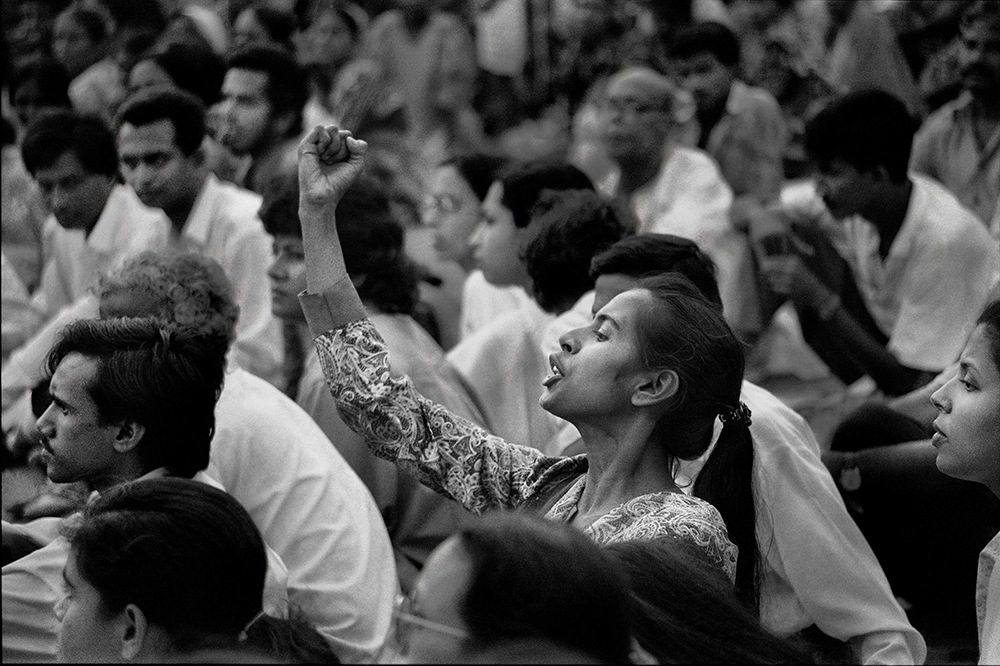 Singer and performer Smriti Azad at a rally at Central Shahid Minar in Dhaka, 1994

Alam’s photographs work not just to inform the viewer, but to raise awareness of the stories he covers. Whether it is poverty, refugees or the disappeared, the formal labels of art, activism or journalism are separated only loosely.

“I will show where I can, as I can, as effectively as I can, to bring about the changes my work is aimed at bringing about,” he told me. “One of my most successful exhibits, Crossfire, has been shown on museum walls, galleries specializing in photojournalism, art festivals, and hung on trees and pasted on public walls.”

At his talk at Columbia and running throughout The Tide Will Turn is this intersection between journalism and activism, and his belief that you can walk the line between them without sacrificing journalistic ethics to try and drive change. 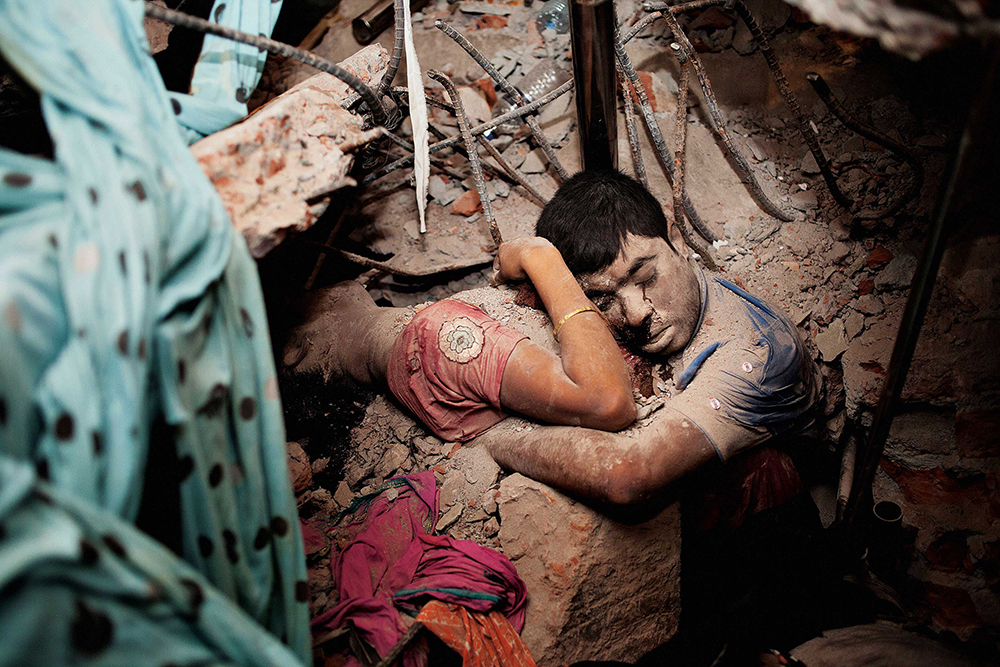 This decision always to be truthful to the story while bringing change is the heart of Alam’s work, and the power behind it. Working within journalistic standards makes his work hard to refute.

Those who don’t agree with what he is saying try to silence him, most noticeably by hacking or shutting down his social media, as happened the morning of his opening at the Rubin Museum. But Alam continues to speak out and tell the stories that others want silenced.

“I want my work to have impact and I will use any method that works. I will sing and dance if I have to, but at the end, I will make sure that the audience cannot walk away unmoved.”