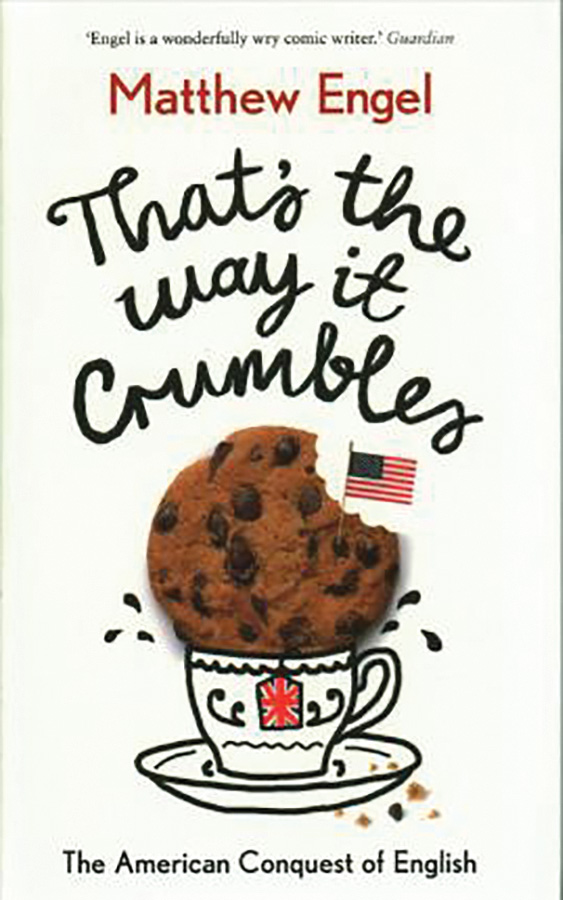 That’s the way it Crumbles, by Matthew Engel

Right from the start, the author of this delightful book about the eternal feud between Britons and Americans over how their common language famously divides them seems to leave little doubt about where his sympathies lie. The book is dedicated to an American friend living in the UK who, the author says, “after forty-four years in Britain nearly always remembers to say ‘to-mah-to’.”

The new book, That’s the way it Crumbles, by Matthew Engel, has as its subtitle “The American Conquest of English”. This makes it sound like a rant by a huffy Brit complaining about those upstarts from across the pond who are swamping his precious language with their vulgar Americanisms.

There is certainly no doubt that Engel is British: for 12 years he edited Wisden’s Cricketers’ Almanack, the bible of cricket. You can hardly get more British than that. And he does bemoan how the influence of Americanisms has grown, to the extent that British politicians now casually use baseball terms such as “stepping up to the plate” even though the sport has never caught on in the UK.

But Engel, whose wry and perceptive humour has graced a succession of books and a host of newspaper columns, insists the book is not anti-American. He has lived in the U.S., relished his time there, visited all 50 states, loves Doonesbury and the Simpsons. He adores baseball.

He also points out that many supposed Yankeeisms that make Brits grind their teeth such as “gotten” (got), “fall” (autumn) and “mad” (angry) in fact originated in Britain. Instead of shuddering, maybe Brits should be grateful that their ancient parlance (“gotten” was in use in Tudor times) has been preserved.

That said, there are certain America-only phrases that do get up Engel’s nose. For example if I had wanted to annoy Engel, I would have started this review with the words: “From the get-go…”

He abhors this particular phrase which he says is “inelegant, repetitive, etymologically ludicrous.” But – and this is one of the book’s many attractions – Engel does not simply list Americanisms but also delves into their background and history, even of those he dislikes. For example he notes that the despised “get-go” turns out to be a black American term which appeared in the 1950s, possibly in a 1958 Hank Mobley number called “Git-Go Blues”.

Misunderstandings between Brits and Americans over what they really mean have occasionally had tragic consequences. As AFP’s former Seoul bureau chief Simon Martin reminded me, a British unit under intense attack in the Korean War radioed to its American allies that things were getting “a bit sticky”, an unfortunate understatement as what was really meant was “desperate”. Quite understandably the Americans failed to grasp how critical the situation was for the British, and when they did it was far too late.

As for the continuing transatlantic language tussle, Engel predicts that, in another century’s time it is quite possible to imagine that the American version of English will have absorbed its British counterpart completely.

But the Economist for one begs to differ, saying: “This (prediction) is – to use another Americanism – horsefeathers.” British English is in rude health. “Mr Engel is right to dread a ‘linguistic monoculture’. He is wrong to think that it is likely.”

The title for Engel’s book, as film buffs will surely recognise, comes from the 1960 classic “The Apartment”.

Fran Kubelik (Shirley MacLaine): “Why can’t I ever fall in love with somebody nice like you?”

That’s the way it Crumbles – The American Conquest of English