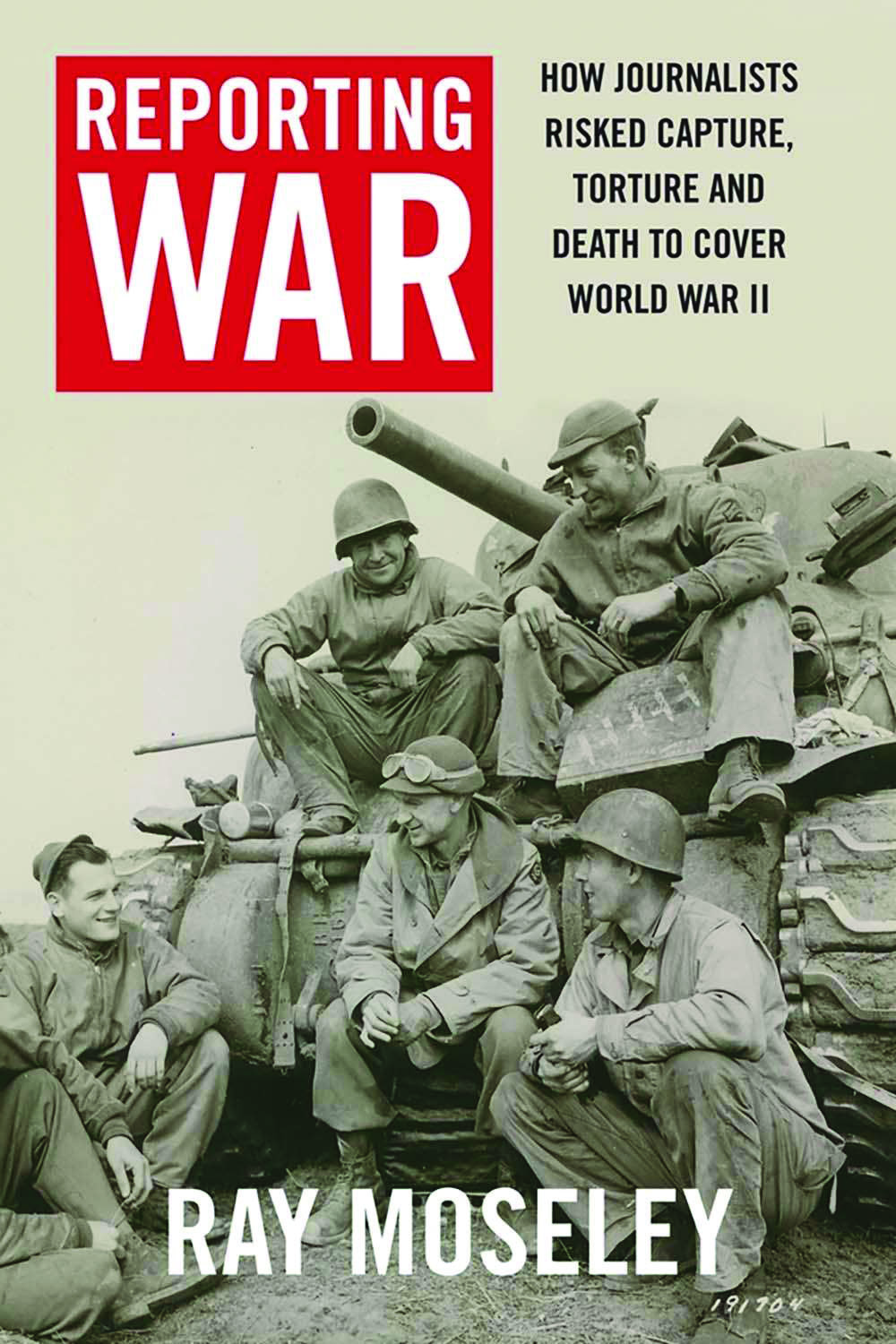 When the bullets start flying, foreign correspondents become war correspondents. It’s a career shift relished by some but fills others with utter dread. A new book about journalists who covered World War II chronicles the conflict that shot some newly minted war correspondents to stardom, blitzed the reputation of others, scared the hell out of most, and killed scores. Occasional war correspondent Jonathan Sharp – scared but unscathed – reports.

Long-time foreign correspondent Ray Moseley says he wrote his thoroughly engaging book “Reporting War – How Foreign Correspondents Risked Capture, Torture and Death to Cover World War II” to give a perspective not often covered by conventional histories, namely the hack’s-eye-view of war. It pays due tribute to the brilliant reporting and scoops achieved in the face of almost insurmountable difficulties. But it also comments – often critically – on the wildly varying quality of what journalists filed. There were multiple failings along with the triumphs.

Memorably, we also hear the personal feelings of the reporters, what they feared most and the revulsion they felt in the face of the horrors of war. These included the scenes in liberated concentration camps which, as can be imagined, stretched the journalists who saw them to their professional and personal limits.

A pre-internet world without satellite phones sounds hopelessly remote to today’s war correspondents. But in other respects the problems faced by the 1939-45 reporters including censorship, the difficulty of finding facts in the fog of war, and – not least – the sheer danger are still very much issues for their 21st century heirs.

There may be other parallels, including the camaraderie and even shameless collaboration that can flourish when competing, hard-pressed reporters gather in one place. But perhaps the heavy carousing and endless cigarette smoking that Moseley speaks of in those bygone days may not be so pervasive today.

In his exhaustive but by no means exhausting book that includes dispatches on most of the war’s main campaigns, Moseley starts by reminding us that the history of war reporting of the kind familiar now is short. Amazingly in 1815 when London alone had 50 newspapers, not one sent a reporter to cover one of the century’s biggest news stories, the Battle of Waterloo.

By contrast about 1,800 correspondents were accredited to Allied forces in World War II. The ranks of the reporters who happily signed up, or were abruptly summoned, to put themselves in harm’s way included well-known authors – Ernest Hemingway and John Steinbeck among them. But many were complete neophytes, fresh to the field of battle or even to the mysteries of a foreign country. While there were some swashbuckling, larger than life types (several even brought along their pet dogs) most were a far cry from the macho sort depicted in movies. “A fear of death or serious injury hung over many for years at a stretch and most did not resort to any pretence of bravado.”

From this motley brigade emerged figures who became post-war household names: Edward Murrow and Walter Cronkite in the United States, Clare Hollingworth and Richard Dimbleby in Britain, and Australia’s Alan Moorehead. (Another Australian featured in the book, Noel Monks, father of the FCC’s very own Sarah Monks, had already won his war correspondent’s spurs and renown before 1939.)

Of the reporters covering the Allied campaign, 69 met death on the battlefield, in accidents or from disease. Of American reporters, 2.2 per cent of them were killed and 6.8 per cent wounded, compared with 2.5 per cent and 4.2 per cent for the American military. Moseley says no figure for Soviet correspondents is available but 16 working for just one newspaper, Red Star, died between June 1941 and spring 1944.

Moseley says German and Japanese correspondents were excluded from his book because no independent reporting was possible in those countries. But he also raises the point: just how “independent” were the correspondents on the Allied side of the lines? After all, many made no effort to hide whose side they were on. Far from it. Their dispatches made them sound like cheerleaders for the Allies rather than dispassionate observers. And this bias was not only accepted but applauded by their employers, by many readers and not least by the Allied commanders and governments. So Germans were Nazis, Jerries, Huns, Krauts or Heinies. Japanese were Japs or Nips. (My war correspondent father Richard Sharp, after covering the Burma campaign in 1944-45 for the BBC gave a broadcast for children in UK. It was entitled “Fighting the Jap”.)

It’s humiliating to look back at what we wrote during the war. It was crap… We were a propaganda arm of our governments.

The supposed independence of Reuters, my former employer, could also be questioned. In 1941 Reuters created its Trust Principles – still very much part of the agency’s credo – which call upon its employees to act at all times with integrity, independence and freedom from bias. It’s a fine-sounding call for journalistic rectitude, but hard to square with the British Foreign Office reportedly paying part or all of the salaries of Reuters’ war-time correspondents.

One Reuters correspondent, Canadian Frank Lynch, frankly admitted the lack of impartiality. He wrote after the war: “It’s humiliating to look back at what we wrote during the war. It was crap… We were a propaganda arm of our governments.”

But sometimes it was crap not because it was propaganda but because some correspondents resorted to making up, or at least over-dramatising, what was happening. Hemingway comes off badly in this respect. The book calls him a “self-aggrandising boor” who earned the ire of his fellow correspondents. One of them wrote that Hemingway, draped with pistols, seemed like a small boy playing at soldiers. One of Hemingway’s biographers is quoted as saying that none of his dispatches from Normandy was completely accurate.

One of the greatest frustrations facing war correspondents then, but to a lesser extent now as a result of modern communications, is censorship. This was often enforced by untrained people clueless about what they were doing. One egregious example involved John Gunther of the Chicago Daily News who asked for a copy of a leaflet the British had dropped over Germany. He was told he could not have it because publication “might give the enemy vital information”. This ignored the fact that the enemy already possessed the vital information because two million copies of the leaflet had been dropped on Germany.

But uppermost in the minds of most war correspondents, as with the troops with whom they shared foxholes, was the real possibility of death or mutilation. Many reporters cited in the book are movingly candid about being gripped, even paralysed, by terror. Not a few quite understandably preferred to stay in the comparative safety of command posts rather than venture to the front lines. As ever in time of war, while there was much intrepid derring-do, there was also derring-don’t.

Maybe one should also be reminded that it is not just in times of war that journalists make the ultimate sacrifice. Mexico, not at war with anyone, is now recognised as one of the most dangerous countries to be a journalist, falling between war-torn Afghanistan and failed state Somalia. According to the Committee to Protect Journalists, 66 reporters have died violently in Mexico since 2007. One of the finest, Javier Valdez, was murdered by unknown assassins on May 15.