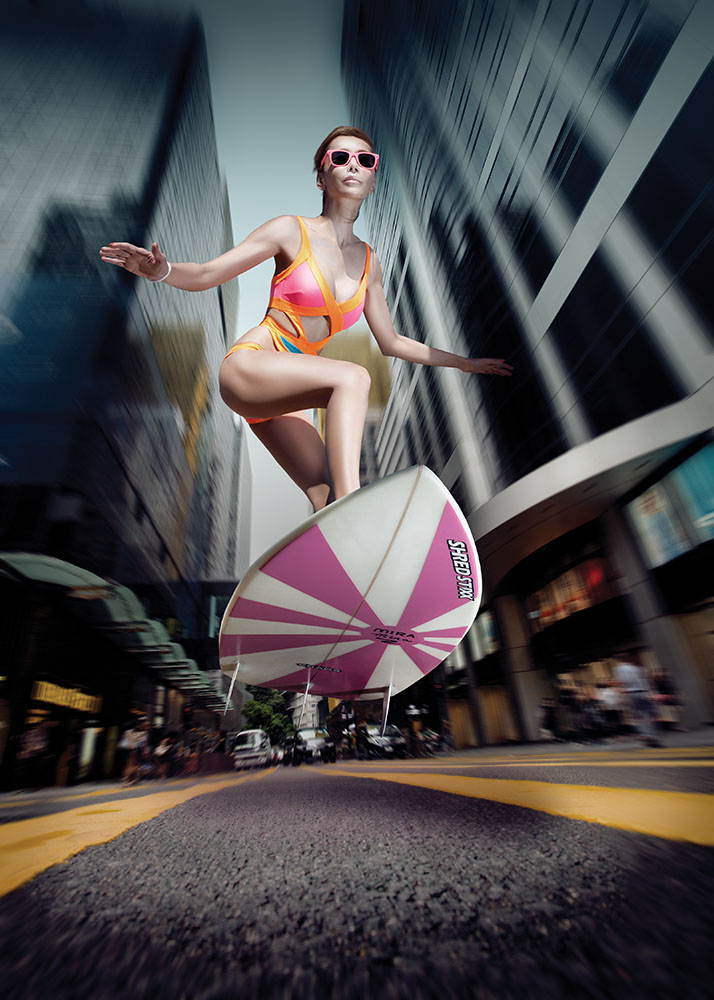 Censorship, controversy, accolades: A year in the life of photographer Nic Gaunt

Earlier this year Nic Gaunt won a Gold prize for excellence in feature photography at the Asia Media Awards. Gaunt used the image of a girl surfing down the streets of Hong Kong in a Tatler feature in October 2015. This award, which goes usually to strictly hard-hitting stories, was given to a more fun take on life.

The Tatler image of Mira Yeh, a well-known Hong Kong socialite and accomplished wake-boarder, surfing down the streets of Hong Kong won a Gold award in the Asia Media Awards. Photo: Nic Gaunt

“When I was introduced to the lovely Mira Yeh it was obvious she was not only a well-known Hong Kong socialite but an extremely accomplished wake-boarder,” Gaunt said. “I wanted to encapsulate her fun personality, her impact on Hong Kong and her sporty side within one image. She was great as she modelled for me trusting my description of the finished image that was only at that moment in my head.”

Gaunt’s provocative images, which regularly get censored by Hong Kong galleries and at the same time sell well in the US and Europe, are now gaining an underground following in the self-censored Hong Kong. While the galleries find that his work is too strong and explicit, the more unusual clubs of Hong Kong are asking to display his work on a regular basis.

His latest exhibition “Invisible Nudes” was on display at the Kee Club in December. It was supposed to move on to The Globe in January, but the Kee Club was reluctant to let them go. “The Globe also wants to mount images from my earlier exhibition “Obsession” in conjunction with “Invisible nudes” which will be fun,” Gaunt said.

In March 2015 the FCC put his “Obsession” exhibition in the Main Bar. While the images featuring fetishes disturbed some members eating lunch, some of those images are now on permanent display in the Burton Room.

For each “Invisible Nudes” image sold a donation will be given to Aids Concern, which recently auctioned a Gaunt image designed to raise awareness of Aids/HIV for HK$42,000. The image, called “Wish You Were Here” which pays homage to the music and imagery of Pink Floyd, was created as a “subtle diatribe” to “raise the awareness of Aids/HIV”, Gaunt said.

“I felt incredibly privileged to have been able to create and give a piece of art that was my own interpretation,” he said. “It was a personal take on the subject and I was delighted that other people were also able to see the feelings and emotions within the finished piece.”

Gaunt also produced the image for a poster about for the Black Box Theatre’s play “Crystal”, which shows lead actor Hong Kong drag queen La Chiquitta, aka Rye Bautista, through a broken window, in vaguely provocative images. However, it was all too much for the HKU campus where the play was to be shown – it was censored and an innocuous image of a pile of crystals in a broken-heart shape was used instead.